For a lot of people, the thought of free solo climbing is pulled straight from a nightmare. You are hanging from the side of a cliff, the top far out of reach, and you have no ropes. If your hand slips or your foot gives way, you fall to your death. Because you’re so high up, it takes 14 seconds before you hit the ground. While this is nightmarish to some, to others, it’s what they do, and it’s what they love. 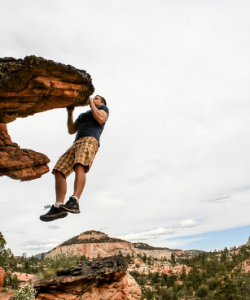 The most famous solo climber in the game right now is Alex Honnold. He just climbed El Capitan, a vertical rock face in Yosemite National Park. It’s 3,000 feet, and takes even the best climbers with gear a day to get up. No one before Alex had done a free solo climb. On June 3, 2017, Alex completed the climb four minutes shy of 4 hours, making him one of the fastest climbers of the rock face, as well as the holder of the most difficult free-solo climb in history.

Why climb this way? It seems way too risky for most of us. In fact, it has the reputation of being so risky that one of Alex’s sponsors – Clif Bar – dropped him because they said he was doing climbs too risky for the company to support. The North Face, Goal Zero, and La Sportiva continue to sponsor him. Alex’s reasons for free solo climbing are hard to determine. He explains himself by saying solo climbing is just “so fun.”

In the world of risky sports, his simplistic mindset isn’t too unusual. If athletes reflected too deeply on the amount of danger involved in their sport, it would drive them crazy. They would be way too distracted to be successful, and when success is a matter of life and death, it makes sense to clear your mind of everything. That’s what happens when Alex climbs. He says his mind is “empty,” and he doesn’t really think at all. Other free solo climbers agree, and describe their climbs as being like journeys, almost like a form of meditation, where the mind and body are completely at peace with each other. Another climber who frequently climbs by himself without ropes, described it as “liberating” and “a return to the primal seasons.” He calls a good climb a “flawless vertical dance.” 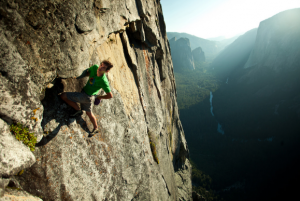 Free solo climbers cannot fear death, or at least, they have to accept it as a possibility. One of the reasons Alex Honnold has pushed himself too far is to get rid of that fear, and he’s now at the point where he’s tired of being asked questions about it. Maybe when you are so close to the possibility of death so often, it almost becomes something familiar, and the fear goes out of it. Free solo climbers keep going back again and again to the world’s most dangerous mountains and stare death right in the face. It becomes a reality for many.

John Bachar, a free solo climbing innovator, died in 2009 after falling from the Dike Wall in California. He was 51, and had spent his life climbing everything he could find. Many free solo climbers do end up meeting their ends on the rock, though friends and family always say they died doing what they loved. While those of us who like to keep our feet safely on the ground may not understand the allure of solo climbing, we can understand the appeal of living life to the fullest, even when it’s risky.

Log Homes Are Beautiful, But Are They For You?