Kids often see who can hold their breath the longest when they’re at the pool. The average human can hit 1-2 minutes, but there’s something different about the Bajau. In Cell, a science news magazine online, researchers described the study of a group known as “sea nomads.” Capable of holding their breath for long periods of time and diving more than 230 feet underwater, what separates the Bajau from other people? 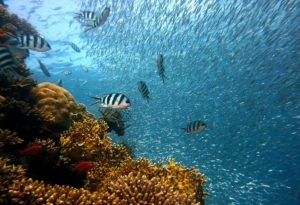 For over 1,000 years, the Bajau have lived on houseboats off the coasts of Malaysia, the Philippines, and Indonesia. They spend over 5 hours a day free-diving for fish without wet suits, flippers, or modern masks. Diving is so important to the culture that some purposely rupture their eardrums when young, so diving is easier. While most of their dives are relatively short at just 30 seconds, they can hold their breath for much longer. One diver said he could hold his breath for 3 minutes when he was younger. Why?

Rasmus Nielsen, a population geneticist from California, traveled to meet the Bajau and another diving group, the Saluan. He took mouth swabs from 43 Bajau and 33 Saluan and measured their spleens. Why the spleen? The organ acts as a reservoir of red blood cells, which carry oxygen. When you hold your breath, the spleen contracts, releasing the oxygen-rich cells into the bloodstream so the body can continue its normal functions. Nielsen and his team measured their findings against unrelated people living in a nearby community who don’t dive 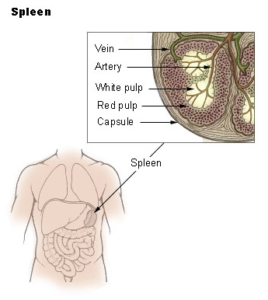 The tests revealed that the Bajau and Saluan possess a mutation in their PDE10A gene. This gene works in the thyroid gland and controls hormone release. The mutation in the divers is associated with higher levels of thyroid hormones, which in a study on rodents makes their spleens grow bigger. In other words, the PDE10A mutation causes the super-divers’ spleens to grow larger, giving them an ability to hold their breath longer than others. How much larger? Up to 50%.

The study unearthed other interesting differences between the divers and non-diving groups. Another gene, BDKRB2, which plays a role in the amount of oxygen given to the heart, brain, and lungs, looked different. Researchers plan to continue examining this gene and FAM178B, which affects the levels of carbon dioxide in the blood.

What does this mean?

Though fascinating, this one study doesn’t actually prove very much. A study of only 43 people isn’t enough to make any declarative statements; scientists usually require thousands of participants and multiple studies before they feel confident about anything. It does give them a great launching pad, however.

It’s also very unusual to find an adaptation that occurred so quickly, since it usually takes millions of years. The Bajau have only been diving for thousands of years, and it isn’t the only adaption they possess. A 2003 study showed that they can see underwater better than those who don’t dive as much. Researchers believe the Bajau’s culture of diving for food and the importance of diving well sped up the evolutionary process.

Researchers plan on returning to the Bajau and performing more studies. They have questions about other aspects of the divers’ bodies, like what the ratio of carbon dioxide and oxygen in the blood is. And what does their heart rate do on long dives? This information could reveal more about the body and its ability to use oxygen when it isn’t readily available, which the medical community is especially interested in.

The impact of trauma on a person’s DNA is another recent discovery you might have read about in a science news magazine online. Are the effects of trauma hereditary?