The football season came to an end last weekend with the New England Patriots crowned champion again. The Daytona 500 isn’t until next weekend, which leaves the stage to college basketball this week. While it isn’t March Madness, early February in college basketball is a crucial time of the season. Conference matchups are heating up, and seeding for conference tourneys are in the balance. Do you want your team to be eliminated from post-season consideration because they had to play Massive U in the first round? Then you had better hope they do well now. Here is a rundown of the best college basketball has to offer for this weekend. National rankings are in parenthesis. All times Eastern.

It’s a rough week for Villanova. The 14th-ranked ‘Cats take on a scrappy Creighton squad in Omaha Wednesday night and then travel to Milwaukee for a game against Marquette Saturday afternoon. That’s life in the top half of the tough Big East. In Saturday’s tilt, expect the decision to go as the Battle of the Guards goes. The Wildcats are led in scoring and assists by senior guard Phil Booth. The Golden Eagles counter with junior guard Markus Howard, who is tallying over 24 points a game on the season. Fox has the call in this one.

A Seminole fan can be forgiven if they are roller-coaster dizzy. This has been an up and down season for Florida State. Win five in a row twice, win seven in a row, lose three in a row. Their strength is defense. Their weakness is scoring at a high rate, as evidenced by their leading scorer checking in at a mere 13.2 points a game. Louisville comes into this game having won eight of their last nine. The ‘Noles need this one for conference relevance. The Cardinal have their eye on Duke and UVA at the top of the standings. ESPN2 has the call. 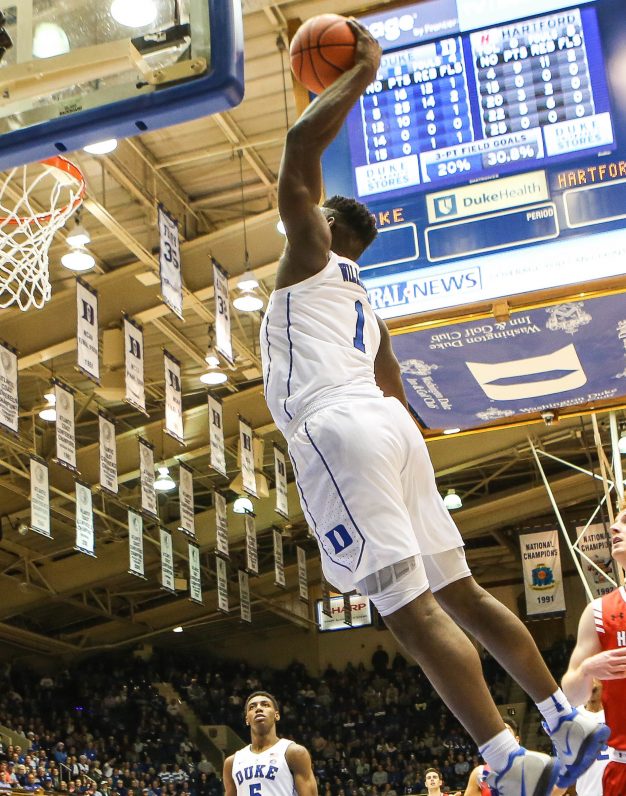 Can Virginia ground Duke’s Zion Williamson in the key college basketball matchup of the weekend?

Speaking of Duke and UVA, they clash Saturday night in the college basketball spotlight game of the weekend. Regardless of the outcome of this one, it is a matchup we could see again in the tournament, or even the Final Four. This is the one game that Gildshire will be sure to schedule, as the coaching matchup between Duke’s Coach K and UVA’s Tony Bennett is part of the fun. The Blue Devil’s forward combo of R.J. Barrett and Zion Williamson will give the Cavaliers’ all they want and then some. Can the stifling UVA defense neutralize Duke’s offense? We can’t wait to find out. ESPN has the call.

Your first Sunday without football since early September may come as a bit of a shock, but there is an intriguing college basketball game to watch. The Cougars and Bearcats top the underrated American Athletic Conference so this one will go a long way toward deciding league honors. The two teams’ statistical breakdown is very similar as both average 75 points a game. Cincinnati’s junior guard Jarron Cumberland could be the player that gets Cincinnati over the top.

That’s the college basketball slate of important games for this weekend, but if your team is playing, that’s an important one, as well. Enjoy the games, everyone!