The temperature may be stubbornly resisting dropping below the Crock Pot setting but time marches on. The college football season gets underway this weekend with some Associated Press Top Twenty matchups. Also, some intriguing games between teams on the outside of the A.P. Top Twenty are scheduled this week. Today, Gildshire Magazines prepares you for the start of the season with a college football preview. Questions, storylines, contenders, and pretenders. We lay them out for you while you lay out a grocery list for the first Big Game Party of the 2017 college football season.

(Never scrimp on french onion dip. It is always the first to go.)

American Athletic Conference: Defending Champion-Temple. Preseason Favorite-South Florida: The top story in the AAC at the beginning of the season has to do with the league favorite. The South Florida Bulls had a good deal of success under Head Coach Willie Taggart. So much success that a bigger pond invited him in to play. Taggart is now the Head Coach at Oregon. How will South Florida do in his absence? That is Charlie Strong’s task, and a major college football preview question mark. 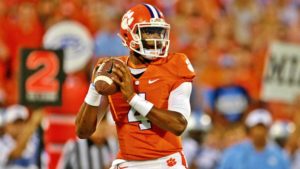 Deshawn Watson led Clemson over Alabama 35-31, in one of the great championship games in recent memory.

Atlantic Coast Conference: Defending Champion-Clemson. Preseason Favorite-Florida State: The Clemson Tigers begin life after Deshawn Watson, who has taken his talents to Houston. Expect Head Coach Dabo Sweeney to reload, but oddsmakers expect it won’t be soon enough. At the other end of the spectrum, can Virginia rebound after a dreadful 2016 campaign? Just hired in Dec. of 2015, Head Coach Bronco Mendenhall has a little leeway, but another 2-10 season will make Cavalier fans wonder if they backed the wrong horse.

Big 12: Defending Champion-Oklahoma. Preseason Favorite-Oklahoma: The Sooners have been the Big 12 favorite so many times that pundits call it OU and the Little Eleven. Expect another big year in Norman, but the intrigue comes out of Austin, Texas. That’s where Tom Herman was hired to bring Longhorn football back to prominence. Is he on the right track? Watch Texas’ Red River Shootout against Oklahoma, played this year at Texas Stadium on Oct. 14. If the ‘Horns win or keep it close, good things could be ahead.

Big Ten: Defending Champion-Penn State. Preseason Favorite-Ohio State: The story in the Big Ten has to do with a couple of impatient fan bases. Nebraska and Michigan State fans want conference relevance. Instead, the oddsmakers list the Cornhuskers and Spartans as middle-of-the-road yet again. Mike Riley leads Nebraska in this, his third season. The short tenure may by Riley some ice for his hot seat. mark Dantonio is entering his 11th year in East Lansing. Sparty fans want Ohio State to look up at them for once.

Mountain West: Defending Champion San Diego State. Preseason Favorite-San Diego State: Rocky Long is building a program in San Diego! Of course, being recruited to spend four years in America’s Most Liveable City is anything but unattractive. That said, perhaps Long and the Aztecs should take note of what happened last week in Colorado State’s first game in their new home, as the Rams laid a major whipping on the Pac-12’s Oregon State Beavers. 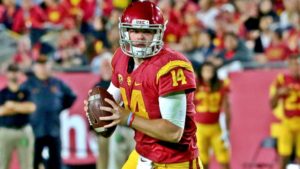 Our college football preview believes Sam Darnold may be a Heisman hopeful.

Pac-12: Defending Champion-Washington. Preseason Favorite-USC. The Washington Huskies made the National Semifinals last year, but find themselves a big underdog to USC coming into this season. Two reasons stand out. Washington had years of irrelevance up until last year. Are they for real long term? Also, USC quarterback Sam Darnold is the presumed Number One draft pick in the 2018 NFL draft. He is that good.

Southeastern Conference: Defending Champion: Alabama. Preseason Favorite-Alabama. You already knew that, didn’t you? Alabama’s conference dominance is astounding in its length and scope. NFL jobs used to lure Head Coach Nick Saban. Now, he’s the de facto mayor of Tuscaloosa. Is there an interesting story in the SEC besides ‘Bama? One may emerge, but the SEC East is so far behind the Crimson Tide as to have lost sight of them.

That’s our college football preview. Was your favorite team on the list? If not, then we hope they are a surprise, coming out of nowhere in late fall.

Now, did you buy that french onion dip that you knew was my favorite? Come on, you’re better than that!