Conspiracy theories have been around as long as there have been two people whispering to each other. Such theories run the gamut from pop culture to politics to science. They can be fun, or on the other hand, they can be fantastic, and not in a good way. It all depends on who believes and who rolls their eyes. Today, Gildshire Magazines examines some of the most common conspiracy theories. From whence did the suspicion come, and is there a kernel of truth? Are we dealing with utter nonsense, or is the truth (cue the X-Files theme music) out there?

The Reptiles Control Us

Let’s begin with the one that is arguably the most far-fetched of the lot. They are among us, living as our leaders, our corporate executives, our beloved Oscar-winning actors, and Grammy-winning singers. They’re responsible for the Holocaust, the Oklahoma City bombings, and the 9/11 attacks. British Broadcasting sports reporter David Icke leads his followers down black holes that wind up accusing members of the Royal Family, the President Bushes, and Bob Hope of being alien/swamp people in disguise. Believable Factor. 0.0

AIDS and the CIA

The worldwide HIV-AIDS epidemic came to light in 1981, informing the public of this deadly virus. Shortly thereafter came rumblings of a conspiracy. Did the Central Intelligence Agency create the virus as a way to shrink the gay and black population? A companion theory insists the virus was injected into the veins of gay men during 1978 hepatitis-B experiments in New York, San Francisco, and Los Angeles. President Nixon’s name shows up in some of these theories. Believable Factor. 9.5%.

In spite of mountains of photos taken of mountains of bodies, there is a certain segment of people who deny the truth, or at least the scope, of the Holocaust. Decades ago, the German government apologized for the massacre. Hoax believers continue undaunted in their belief. Certainly, there is an Anti-Semitic factor in play here. Otherwise, why would it be so important to minimize the count? Let’s treat these as two conspiracies. Believable Factor That the Whole Thing Was a Hoax: 0.0% Believable Factor That the Numbers Are Lower Than We Are Told: 1.5%. 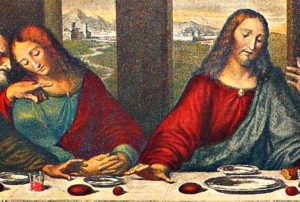 This conspiracy theory predates Dan Brown’s “The Da Vinci Code” by almost 2,000 years. The non-canonical Gospel of Philip first brought it to light. There are several writings found outside the canon that refer to Mary Magdalene as Christ’s “companion,” or “partner.” None of them, though, specifically use a term we would translate to “spouse.” Believable Factor. 21%. 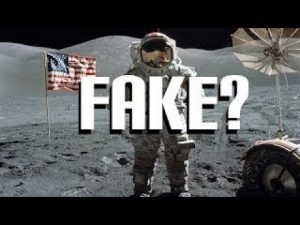 Supposedly a Los Angeles-area soundstage doubled as Tranquility Base while the world sat transfixed by the “landing.” According to this conspiracy theory, the waving flag as Buzz Aldrin planted it proved that the landing was actually on Earth. NASA counters that Aldrin twisted the flagpole into the surface of the moon. For this one to be true, literally, tens of thousands of scientists would have to lie all at once. Amazingly enough, though, this is one of the more enduring theories on the list. Fully 6% of polled Americans believe it, while 5% remain unsure. Believable Factor 0.1%

Somewhat related to the reptile one, but with fewer scales. In this theory, a controlling stew made up of Freemasons, the Illuminati, Yale’s Skull and Bones, and the Knights Templar make all of the world’s important decisions.  Mysterious cabals occupy virtually every seat of power, from the corridors of government to the boardrooms of Wall Street. How do you know if you are part of the elite? If you have to ask, then you aren’t. Reluctantly, we recognize some credence in this one. It’s well-known that Washington D.C is shaped like a Freemason symbol. Oh, and what is with the eye on the dollar bill? Believable Factor for the Whole Secret Society Thing? 38%. Believable Factor of Something Up With Skull and Bones? 50% 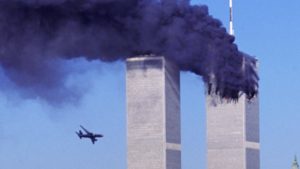 Seventeen years ago, the meaning of  “9-11” changed forever. The coordinated attacks on New York City and Washington D.C. changed our politics, the national discussion, and the ease and convenience of air travel forever. A group of, mostly Saudi, terrorists attacked us! However, did they attack alone or in concert with forces inside our own government? There is no shortage of people who believe collusion was a part of 9/11. Could the jet fuel alone ignite that kind of fire? Why weren’t fighter jets scrambled? Were the attacks allowed to take place to gain support for President Bush’s desire to attack Iraq? We know this for sure. The greater the tragedy, the greater number of conspiracy theories. If you don’t believe that, just wait until our last one. Believable Factor 3%. 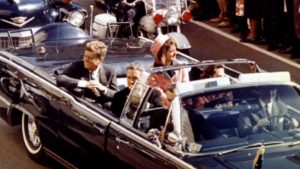 President and Mrs. Kennedy, minutes before shots rang out.

Perhaps the mother of all conspiracy theories is around Dealey Plaza, Nov. 23, 1963. Up until 9/11, the Kennedy assassination topped a list of “And we were never the same” moments. John and Jackie Kennedy breathed air into a society weary of old and (trying not to be unkind here, but…) unattractive Presidents and First Ladies. They were Camelot, writ into the United States of America. The President shot by a lone gunman. It seemed too much to accept. So, many people refuse to accept it. The cast of possible conspirators stretches from the C.I.A to organized crime, to Cuba, to Russia, to Lyndon Johnson. Take your pick and there’s a book written to support your choice. Probably, five books. Or 101 books. The scope of theories is that large. Where do we stand? It’s sad that Jack Ruby never talked. Or did he?  Believable Factor: 52%

There are more conspiracy theories out there. They include the makeup of contrails behind jet planes. You’ll know who subscribes to this one if you hear them mutter, “chemtrails.” Other conspiracy theories include Paul McCartney’s alleged death during the hey-day of The Beatles. Still, others claim that Elvis was alive in the 90s.

However, we think these are the pre-eminent ones. What do you think? Are any of these conspiracy theories in line with your beliefs? You are not alone…and that could be the case for all of us. Where is that X-Files theme music I keep hearing?

Gardening Tasks in the Month of January