The Controversial Inauguration of Vladimir Putin, Russia’s Modern Tsar and His Desire to Reignite Soviet Power

written by Gabriela Golumbovici May 7, 2018

Vladimir Putin has been the most powerful key figure of the last two decades on Russia’s political scene. His overwhelming victory in the recent presidential elections means he will be around for at least the next six years, invested with full control over the destiny of a powerful nation.

Viewed from the comfort offered by western democracies and liberalism, Putin’s grip on power appears surreal. His continuous rule seems to suggest that the Russian people have a sweet tooth for autocratic rulers and settle for façade democracy. Rigged elections go hand in hand with violent methods of suppressing opposition. United Russia, the party Putin founded back in 2001 is a monolith that holds more than 75% of the 450 seats in the State Duma. Such a comfortable majority allowed Putin a virtually unopposed hurray into building a state-controlled economy, in which oligarchs come and go as he pleases.

Often praised as a savior, Putin did enforce measures that pushed Russia past a less glorious 10-year period following the collapse of the Soviet Union. Intense economic and social turmoil ended once the country returned to a more centralized political system. Vladimir Putin is largely credited with restoring the country’s position as a major international player, with ambitions that easily remind one of the hottest days of the Cold War. Military interventions in Chechnya, Georgia, and Ukraine, culminating with the annexation of Crimea, are presented to the Russian people as an “offensive” to counter the expansion of NATO and re-affirm Russia as a superpower that is not afraid to flex its muscles and act as a bully in and around its backyard. The recent involvement in the Syrian Civil War shows that proxy conflicts are still an excellent way for old foes to test each other’s strength and nerves. 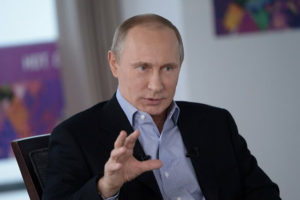 Putin’s alleged interference with the U.S. Presidential elections of 2016 and the Brexit referendum opened a new battlefront, a digital one. With an impressive national hacking culture, the Russian authorities seem perfectly capable of orchestrating attacks or of influencing political events abroad. The spread of fake news, the ever-growing role of social media in people’s lives, and the staggering rate at which personal data is collected, stored, and potentially hijacked opens appealing non-conventional ways of enforcing indirect control.

Putin’s evergreen popularity is a result of constructing a personality cult that reminds one of the Communist ways, and a meticulous crushing and grinding of critics and political adversaries. Projecting a rugged masculinity, the former KGB agent is on a relentless pursuit to prove himself as the fittest one to rule. Often pictured engaged in outdoor activities like bare-chested horse riding through the taiga, with the help of a well managed public relation campaign, Putin has earned a surprising level of popularity in the West through popular culture. Proactive and relentless, the 65-year-old is in stark contrast to the average gray-haired bureaucrat from the European Union’s corridors of power in Brussels.

Even so, it is not hard to imagine a Russia without Putin at its helm. Although apparently enjoying some of the highest approval ratings since he took over from Boris Yeltsin, this modern Tsar probably knows just how much state propaganda was needed to paint such a Disney-like reality over a rather depressing truth. With its move to claim Crimea and support the rebellion in Ukraine, Putin undid many of the goods of his earlier years in office. Economic sanctions teamed up with the fall in the price of oil (Russia’s main export) in 2014 has brought the country’s currency to its knees. Although the economy recovered in the years that followed, it showed that Russia, in the absence of a diverse and strong economy, is vulnerable in the face of market fluctuations.

Employing a tactic that reminds us of Soviet times, Putin took the bitter pill with a smile on his face. There was virtually no data to suggest how the Russian people felt about their ruler in those times of hardship. In any democracy, governments and presidents would have been pushed to step down from power by the impoverished and discontent. Putin continued as if nothing happened.

One of the most colorful and unscrupulous politicians of the present time, Vladimir Putin has helped Russia rebuild itself from the ashes of the Soviet Union and re-affirm its position as an international player. However, in the process of posing as the ideal autocratic ruler, Putin has neglected internal problems for far too long. Russians might be patient people, but their history shows that they had their moment of outrage, when they virtually wiped out all former structures of power and started fresh. Time will tell whether Vladimir Putin will encounter that moment – step down from power or be removed.