It is more than a year since the pandemic officially closed down almost everything in the US and in New York City in particular. Cultural institutions were hit really hard. All theaters, music halls, other cultural venues were shot down in March of 2020 and are still not open.

However slowly but surely more and more people getting vaccinated and the city is moving forward to re-opening. Movie theaters welcomed people in March at reduced capacity. Recently many events were announced, including NY PopsUp cultural events around the city where hundreds of pop-up performances appear live in many places. 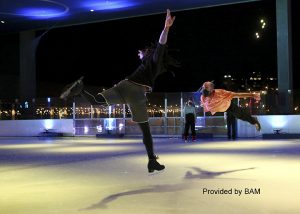 One of the latest pop-ups was for the first time in more than a year on Broadway at St. James Theatre.

The very first live event by BAM was held at LeFrak Center at Lakeside of Prospect Park in Brooklyn on April 6, 2021, with a lovely performance by Montreal-based Le Patin Libre ice dance company called “Influences”. 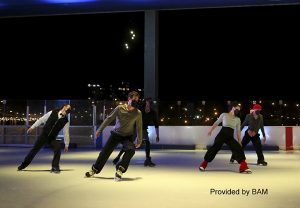 Le Patin Libre company was founded in 2005 by former figure skaters who used their skills to enhance the theatrical and choreographic options on ice.

Their kinetic experience and innovation of dance movements on ice inviting the audience to be on the same level as they move on ice. Their movements are not perfect in the eyes of possible judges from figure skating championships but they produce performances that are enchanting audiences and pushed boundaries of dance on ice.

Five skaters who perform Influences produce such a beautiful dance to show exploration of tension, harmony, and individualism, bullying, and leadership.

And all of New Yorkers and tourists alike are hoping that this is just the beginning of the next chapter of cultural life in the Big Apple.