Darwin and the Kissing Bug

While sailing on the Beagle for five years, Charles Darwin encountered countless exotic animals, birds, and more. It was on this trip that he began formulating his revolutionary theory of evolution, but he might also have met the cause of his death – the kissing bug. 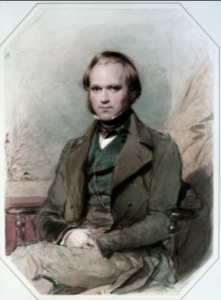 On the ship, Darwin and sailors were pestered by bugs that fed on blood. Rather than being repulsed by them, however, Darwin and the other men seemed intrigued. They would even gather around the insect, and purposely coax it to bite their finger and feed.

Considering that as a boy, Darwin once tried carrying an interesting beetle in his mouth when his hands were full of other beetles, it isn’t too surprising that he was interested in the blood-sucker. He was right to be, as further observations have shown just how unique the assassin bug is. Many members of the family (Reduviidae) will actually wear the corpses of their dried-up prey. The bodies serve as armor and camouflage, and the assassin bug will sometimes walk around with piles of bodies stuck to their backs. Scientists aren’t sure how the bug is able to reach their own back, since apparently it’s like a human trying to lick their own elbow.

Darwin was fine with experimenting on himself using the kissing bug, but he was sadly unaware that the insect can carry a deadly disease, called Chagas disease. It’s spread when the bug bites a human, and then defecates into the wound. Their nickname “kissing bug” comes from the fact they like to bite around their victim’s mouth. If the bug’s feces contain the T. cruzi parasite, a person will eventually experience symptoms like fever, fatigue, vomiting, and so on. This makes it difficult to diagnose the disease right away. The longer the person goes without treatment, the worse it gets, though it can take decades. Heart failure and serious digestive issues can cause death.

Darwin had these symptoms, which has led many to believe he had Chagas disease. After returning home from his voyage on the Beagle and experiences with the kissing bug, he was never the same. He had extreme stomach pains, bouts of vomiting, insomnia, and then heart disease, which took his life.

It was many years before the T. cruzi parasite and the kissing bug’s role was identified, so no one knew what was wrong with Darwin. For years, some people thought he might be a hypochondriac, but his recorded symptoms sound awfully close to those of Chagas. Today, there are two drugs which are nearly 100% effective at killing the parasite, but the longer someone is infected, the less effective they become. Treatment can last two months. Chagas appears most frequently in South America and in the southern United States. 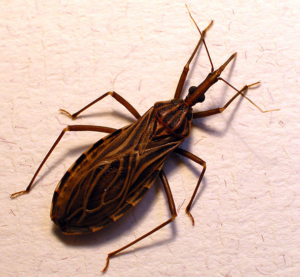 Close-up of a kissing bug

Worried about encountering a kissing bug? You can recognize them by their black or dark brown color with orange or red markings on their abdomens. They can be anywhere from .2 to 1 ½ inches long, which makes them larger than bed bugs. Their bodies look thin until they’ve fed, after which they bloat up like ticks. Unless you live near a wooded area, you are unlikely to see these bugs or experience an attack. A good rule of thumb is you don’t have rats, you probably don’t have assassin bugs, because those two creatures like to hide out in similar spaces.

The praying mantis is another fearsome predator, but the prefer another victim to humans: their own mates or birds.

The Top Five Dining Gems in the Northeast