Gourmet Food We Discovered in Canada

The United States’ neighbor to the north is a delightful place. They offer health care to every citizen from birth to death. They inhabit spectacular scenery. Canadians are extraordinarily polite. How polite? Well, Canada is the birthplace of hockey, yet Canadians aren’t too angry that it has been 25 years since a Canadian team won the Stanley Cup. Yes, Canada is lovely and Canadians are admirable folks who embody the term “good neighbor.” However, they aren’t well-known internationally in gourmet food circles. France has pot-au-feu, Italy has Ragu Alla Bolognese, and England has Chicken Tikka Marsala. The United States has barbecue, and Uruguay has Chivito. What does Canada have to distinguish itself on the gourmet food palates of the world? That’s what Gildshire set out to find. So, we traveled from Vancouver Island to Newfoundland. Here is what we found. 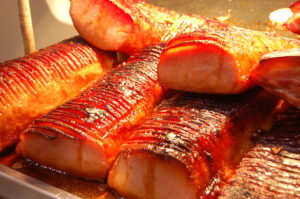 Our gourmet food list begins with a delicious take on “bacon.”

Peameal Bacon: Don’t confuse this with “Canadian bacon.” It is cut from the pork loin and pickled in brine, before being coated in cornmeal. Peameal bacon, with a slather of mustard, and you have a sandwich for a lunch to remember. The best peameal bacon sandwiches are found in Ontario.

Maple Syrup: Sure, you can find maple syrup in the United States, but over 70% of the world supply is Canadian. We already mentioned that Canadians are polite, but they will take you to task over pancake and waffle toppings. Jams, jellies, and peanut butter are not to be tolerated. “Would you like your waffle with maple syrup or maple syrup?” Those are your choices. 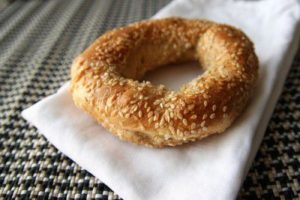 Viandee Fumee: What a great name for what is, essentially, a smoked brisket sandwich. That said, this brisket doesn’t taste like the brisket you have known before. It tastes both smokier and sweeter. That’s because of the Quebecois salts and spices that are part of the curing process. Enjoy a viandee fumee with mustard and a dill pickle on the side. Sometimes, the simplest preparations are the best.

Bannock: This Canadian flatbread came to the Provinces from Scotland. Renowned as a delicious snack, its further claim to fame is its ease of preparation. A staple on the family camping trip, bannock cooks at home, or over a campfire. Flatter than a scone, that is the county fair food from the U.S. that it most resembles.

Beaver Tails: Relax! No beavers suffered harm during our exploration of Canadian food. These are actually bakery-made doughnuts stretched to look like their name. The base for the beaver tail is similar to the bannock, and the completed pastry is covered in cinnamon sugar. 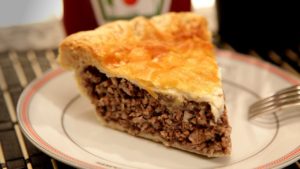 Some call the Tourtiere the best part of Christmas Eve.

Tourtiere: How many foods can claim to have been around since the 1600s? This is a meat pie, beloved in the French-speaking portion of Canada. Ground pork and other ground meats (but mostly ground pork) mixes with bread crumbs and spices. A delicate and buttery crust surrounds the meat mixture. It is a common Christmas Eve dish throughout Canada.

Butter Tarts: How should I describe this gooey wonder? Have you ever had Chess pie? Its like pecan pie without the nuts. That describes the taste of a butter tart. The makeup of your butter tart, though, depends on where you get yours. Out west, add raisins. Back east, not so much.  Some places serve sticky tarts. Other kitchens turn out a tart that is a little runnier. You’ll have to sample a half-dozen each to know which ones you like better.

Poutine: You knew this one was coming. They call it “The Dish That Doesn’t Photograph Well,” so we won’t try. I guess that makes sense, because “poutine” is French for “mess.” It eats extraordinarily well, though. It is served all over the place but Calgary, Alberta is where it is found, literally, everywhere and in great varieties. Traditionally, poutine is cheese curds, potatoes, and brown gravy, mixed up into a…poutine. Extra tasty goodness!

That’s our discovery of gourmet food, Canadian-style. Is it any wonder they are so friendly and polite? A belly-full of poutine and Nanaimo bars make me happy and friendly too.

Vacation Places Where Cars Are Not Allowed