New York versus Los Angeles, in other words, endless sunshine versus actual seasons. Los Angeles versus New York, in other words, Tinseltown versus what James Cagney called in Yankee Doodle Dandy “the legitimate theater.” Marilyn Monroe versus Audrey Hepburn. L.A. v. N.Y, in other words, Dodgers versus Yankees. The reasons these two cities would have a rivalry are endless, and Gildshire Magazines pits the two against each other in an arena that really matters. Where can you find the best desserts, in The Big Apple, or in L.A.? Dessert Wars will answer that question. First the tale of the tape:

While L.A. has more dining establishments that offer dessert items, New York City diners appear to take their desserts more seriously. Pinkberry couldn’t have started in New York, but it is a dessert staple out West.

Enough already with the preliminaries and the posturing, because it’s time for Dessert Wars! New York City throws the first punch. All locations are in New York City or Los Angeles proper. We had to be strict to keep L.A. from claiming places halfway to San Diego. 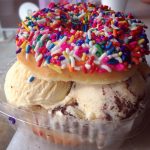 New York City Entry #1: Doughnut Ice Cream Sandwich From Holey Cream: Take a light and airy doughnut…and stuff the bejabbers out of it with ice cream. One scoop? I can’t even hear you. Two scoops? You’re boring me. Three scoops? You’re getting there, but four would be better. Sold! 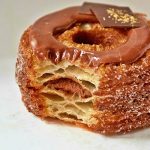 Los Angeles Entry #1: Chocolate Drizzle Cronut from Kettle Glazed: These croissant-doughnut hybrids are lighter-than-air. They float above the counter and you use a grocer’s tool to bring them down. Nah, not really, but they are so light and yummy I had you believing me.

Tough choice here, but that fourth scoop tipped the vote, not to mention the scales. New York 1, Los Angeles 0. 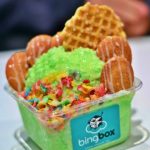 New York City Entry #2: Taro From BingBox Snow Cream: Since snow cream is the next big thing, allow us to explain what it is, by telling you what it isn’t. It isn’t shaved ice, and it isn’t ice cream. It is a weird and wonderful combination of the two, and it comes to our shores from South Korea. A “taro” is Fruity Pebbles, vanilla wafers, and a waffle cookie mixed into this creamy and slushy goodness.

Los Angeles Entry #2: Green’s Freeze From Pressed Juicery: Only in L.A. would the following sentence be born. “Made using only the juice of fruits and vegetables, almonds and coconuts, our Freezes are vegan, gluten-free, and dairy-free desserts that everyone can enjoy. Actually, the Green’s Freeze is far more delightful than the introductory sentence would make you believe, as it is sweetened with dates and coconut.

New York City Entry #3: Chocolate Mint Cannoli From Marinara Pizza: You’ve had a thousan’ cannoli, haven’t you Paisan? Fuhgeddaboudit! You haven’t had a cannoli like Marinara Pizza makes them. Chocolate chip mint and other interesting choices are in addition to the usual vanilla cream and chocolate chip variety.

Los Angeles Entry #3: Banana Chocolate Chip Ice Cream From Peddler’s Creamery: My Dad always told me I would enjoy my reward more if I earned it. That’s exactly what you can do at Peddler’s Creamery. Oh, you can just buy an ice cream, because that’s how the plebians do it. Or, you can peddle the Schwinn bike for 20 minutes and churn your treat yourself. It’s Walton’s Mountain meets spin class!

Ice cream and the exercise to work it off in one fell scoop? New York 2, Los Angeles 1. Now we have some Dessert Wars going on!

New York City Entry #4: Raindrop Cake From Round K Cafe: Let’s get something out of the way, before going any further. The Raindrop Cake isn’t going to feel like cake on the tongue. It dissolves…instantly…like a raindrop dissolves. It’s served with a tasty brown sugar sauce.

The cookies take the cake. Dessert Wars is tied at 2-2! One more to go, so the excitement is palpable! 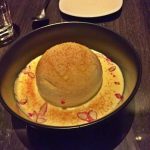 New York City Entry #5: Floating Island at Le Coq Rico: In a town not noted for delicacy, this dessert is a delicacy at its finest. A soft meringue sits in a crème anglaise pool with red praline circling the dish. Light and wonderful, this is a lovely and fetching entry into Dessert Wars, while being at the same time a bold one. 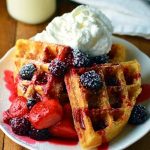 These two are a tough choice with which to finish, not to mention it decides the entire Dessert Wars enchilada. How will we vote, but more importantly, how would you vote? Is light and airy the key to your tummy, or is rich and decadent the siren call to your appetite? Maybe it comes down to a New York state of mind, versus California dreaming, because you cannot go wrong with any of these desserts. Are you ready for the answer, because you are so hungry? Or are you already on the road, because you can’t believe we’re taking so long?

The winner, by a score of 3-2, and taking a bow with the dessert chefs, is Los Angeles, California.

Shapr: Networking For The App Age

Back to School Dynamite Deals For All Ages