A true lover of domestic travel calls all states home. We find joy and beauty from (as Arlo Guthrie sang) the redwood forests to the Gulf Stream waters. The love of all States, though, still leaves room for some states to have a particular hold on us. Washington (State, and that’s the last time we will make that designation) is one of those states. The natural beauty, the bright lights of the big city and the topographical anomalies make us smile. We hope they will do the same for you. Welcome to The Evergreen State.

(More about that in a bit.)

Washington is bounded on the west by the Pacific Ocean, and on the north by British Columbia. Oregon is to the south and Idaho to the east.

The growing population of Oregon Territory north of the Columbia River necessitated the request for a new State. It was granted without debate by the U.S. government in 1853. It was the boundary of the State of Washington that would turn out to be a movable feast.

The boundary of Washington Territory initially extended farther east than the present state line. It included parts of the Idaho panhandle and even western Montana. The 1863 decision to establish Idaho Territory shrank the girth of Washington.

Washington is an urban State breaking our streak of states with more land than people. The 18th largest state with the 13th largest population, Washington is the unofficial capital of the Northwest. Don’t tell Oregon. Portland can get a little cranky about the whole thing.

The highest point in Washington is atop majestic Mt. Rainier. At 14,411 feet Rainier is visible from almost everywhere in the State. We will be visiting Rainier on our trip across. The lowest point is anywhere along the Pacific coastline. The geographic center of Washington is 10 miles WSW of Wenatchee.

Seattle is Washington’s largest city. Known as the Emerald City, Seattle is joined by Spokane, Tacoma, Vancouver, Bellevue and Everett as cities with populations exceeding 100,000.

Tri-Cities Airport enplanes about 350,000 flyers a year. Almost half of them are going to Seattle.

Bellingham International serves about 400,000 people, many of them from neighboring British Columbia. The most popular destination is Las Vegas.

Spokane International greets over a million passengers annually. Many of them are flying to Seattle.

Seattle-Tacoma International serves over 15 million customers a year. The most frequent destination is Los Angeles.

Weird and Wonderful Facts About Washington:

Seattle’s Space Needle is home to the United States’ first revolving restaurant. The Needle was built in 1961, in preparation for the ’62 Seattle World’s Fair.

Washington is the world’s largest producers of apples.

The world’s largest building is the Boeing final assembly plant in Everett.

Oddly enough, Mt. Rainier was named after Peter Rainier, a British soldier who fought against the Americans in the Revolutionary War.

In the early 1900s, Aberdeen had the distinction of being “the roughest town west of the Mississippi.” Because of excessive gambling, violence, extreme drug use and prostitution, the city remained off-limits to military personnel into the early 1980s.

The percentage of non-religious people in Washington is the highest of any state, and church membership is among the lowest of all states.

Popular games Pictionary, Pickle-ball, and Cranium were all invented in Washington. 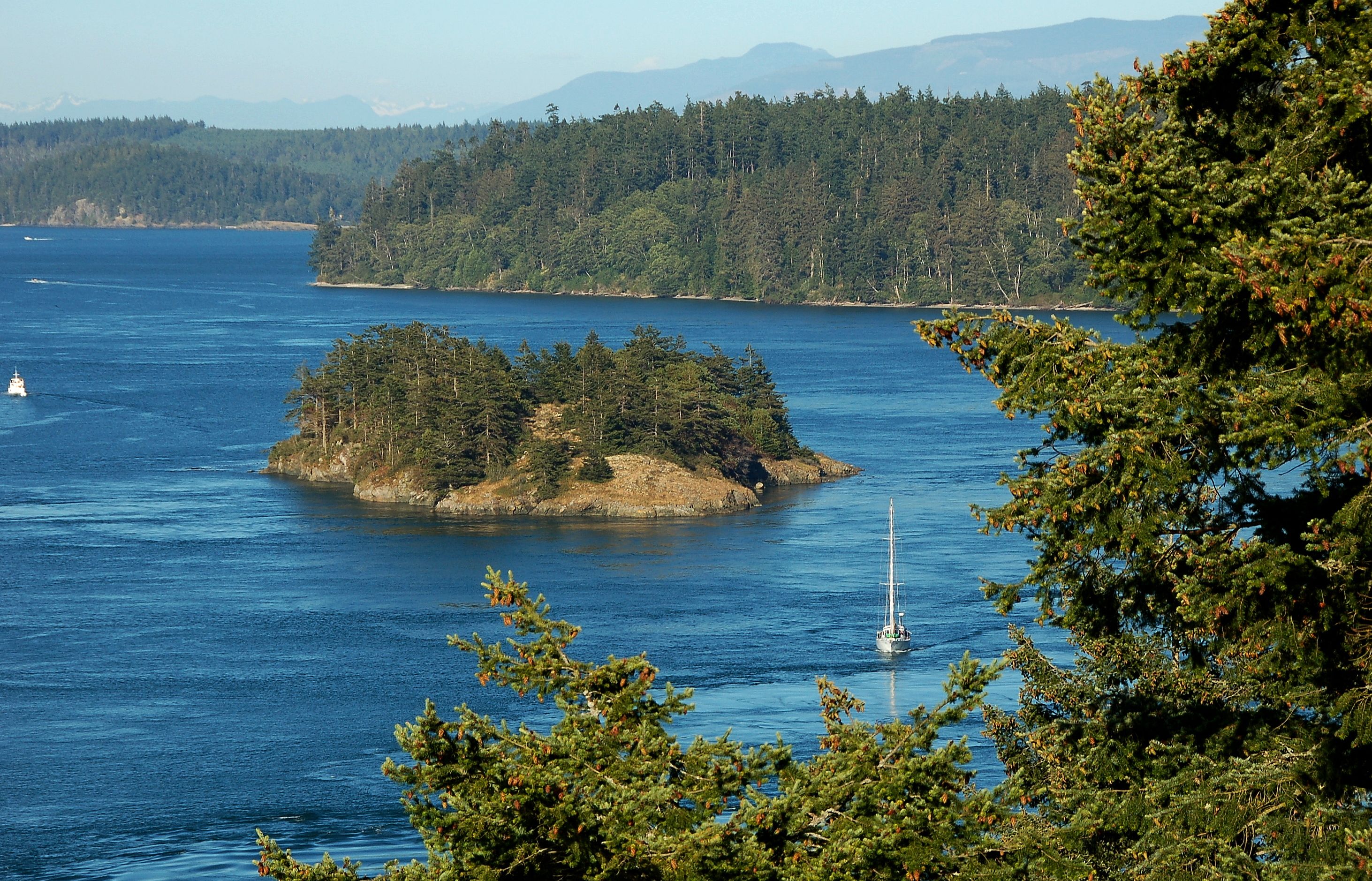 Let’s Take a Trip Across Washington:

Lots to see and do in Washington, Bunky. Let’s get to it! We are going to start at the western edge of the State. It’s where the vampires and werewolves live.

At least they live there in the fevered mind of Stephenie Meyer. She is the author of the series of “Twilight” books that became smash hit movies. She set her books in the gray and rainy town of Forks. Just a dozen miles from the Pacific Ocean at Neah Bay, Forks sees a lot of rain, to be sure. It is also a charming little town with some of the friendliest people we’ve found in our journeys. Try the fries at Sully’s Drive-In.

From rainy little Forks, we are going to travel about 140 miles to one of America’s most beautiful cities. Seattle is a gem, sparkling on the shores of Puget Sound. What to do in Seattle depends on your taste in things to do, because Seattle has it all.

We will be staying two nights at the Best Western Executive Inn for $156/night. Big cities are expensive. Trendy and hip big cities are really expensive. We did well for $156.

For those who like their history with a touch of the macabre, Seattle’s Underground Tour is a must. The city once burned to the ground. This is where you will see what it was.

Do you like to ride on boats? Seattle is connected to the many islands in the Sound by the nation’s largest fleet of ferries.

Do you like sports? Baseball’s Mariners and football’s Seahawks play across the street from each other in SODO (South of Downtown…but really downtown. Seattle, for a large city, has a rather small footprint. That makes it a great walking town.)

In discovering the U.S.A. we like to look down on everybody. From up high, we mean. Seattle Center’s Space Needle is our first Emerald City destination.

Now 55 years old, the Needle is 660 feet high to the observation deck. From there we will see Seattle as the birds see it. Elliott Bay, Lake Washington, the skyscrapers of downtown and the Olympic Range are all in sight. If the weather is nice the city shines.

About the weather. Seattle gets just under 40 inches of rain a year. That is less than many major cities. The city gets a bad rap for rain and is too often overlooked for having the most beautiful summers in the country. Warm, but not blistering hot days with low humidity. Perfect! Don’t listen to the haters.

Steps from the Space Needle are two great attractions. The Pacific Science Center is great for families with a bent toward the scientific and hands-on creativity. We have something a little more musical in mind.

The Experience Music Project is the best music museum west of the Rock and Roll Hall of Fame in Cleveland. Some like the EMP even better than the Hall. Seattle icons Jimi Hendrix and Kurt Cobain are prominently featured. So are things like Star Trek, wearable art and hundreds of other themed attractions. It is part of a great day exploring the area around the Needle. It is a great day on its own. 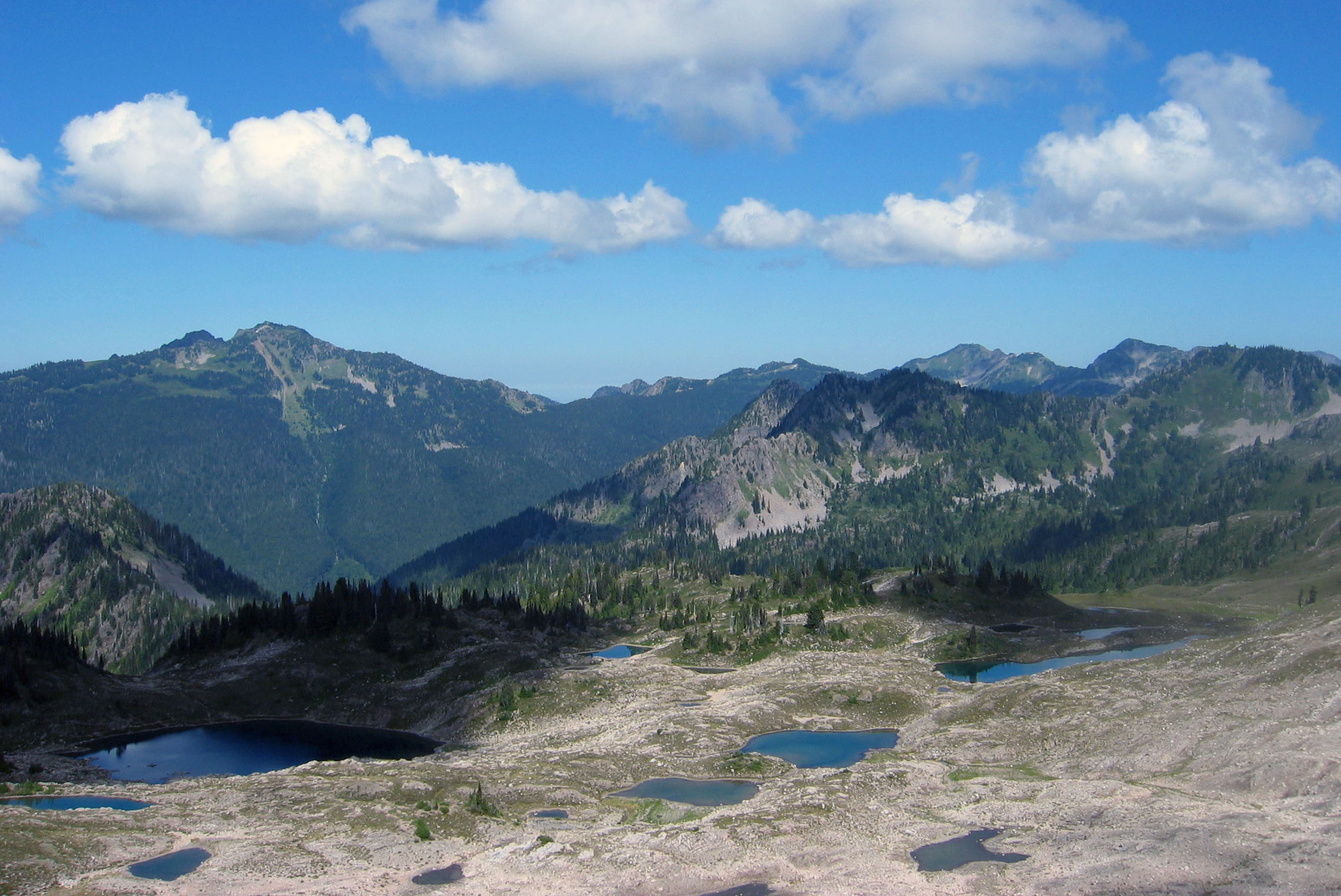 Seven Lakes Basin is a basin located in the state of Washington, Olympic National Park, 15 miles south of Lake Crescent

The next morning we are off to see a mountain. Mt. Rainier towers over all it surveys, rising to over 14,000 feet. We are going to one of the two main Visitor Centers.

Called “Sunrise” the Visitor Center from the South offers the closest view you can get to the mountain without buying crampons and climbing it yourself. There is a restaurant and a gift shop, but the star of the show is the hill itself. One visitor described it as “Like the Garden of Eden.” It is a truly memorable stop on our long trip.

Back on the road eastbound and down, headed for Leavenworth. Not the penitentiary, silly (sometimes I don’t understand you at all). This is the Village of Leavenworth, smack in the middle of Bavaria.

At least you will think it is. You might look around for the BMW (Bavarian Motor Works) plant. The town of Leavenworth has its makeup on and is ready for callers. Built in the style of the Old World, it invites visitors to a touch of the Alps in the middle of Washington. The German/ Austrian architecture is a delight. The bakeries and microbrews are even a greater delight.

While in Leavenworth, we will take an easy hike through Icicle Gorge. It’s a walk under the cover of light forest and beside the sound of rushing water. A most pleasant walk in God’s natural handiwork.

We will spend the night at the lovely Alpen Rose Inn. It is an attractive facility for $129 a night. 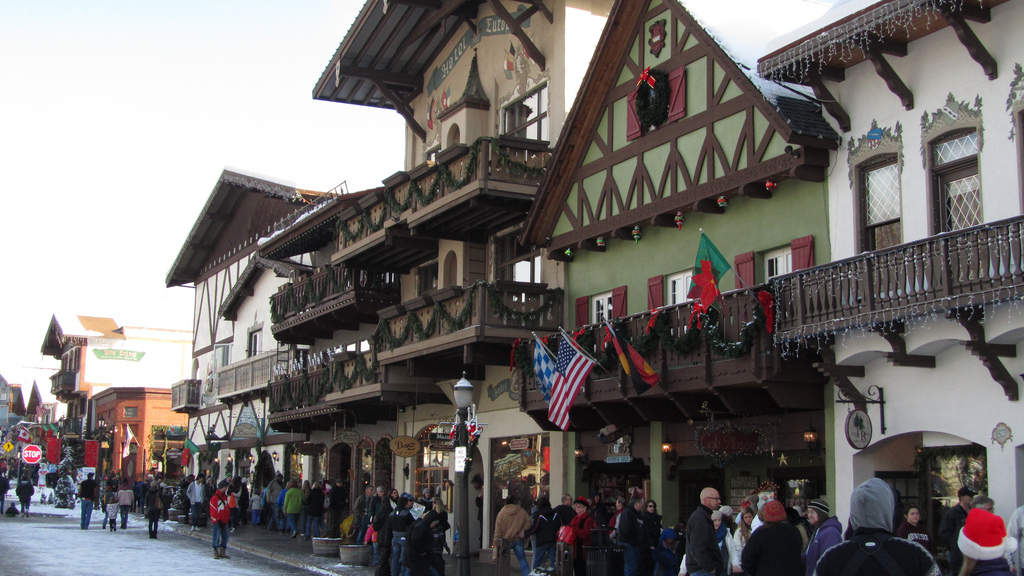 We have a drive of almost four hours ahead of us tomorrow. It will cover the eastern half of Washington. Those of us who can find beauty in every land formation will enjoy the, let’s face it, desolation of eastern Washington’s interior. Others…won’t. We will travel a couple of hours without seeing a tree!

Remember how we welcomed you to “The Evergreen State?” Well over half of the state isn’t evergreen at all. The very term highlights the same differences between east and west in Washington that we briefly touched on in Oregon. The people in the eastern half of Washington often feel left out. They are culturally/ politically more conservative than their western counterparts. Folks from eastern Washington identify more readily with Idaho, and it makes for some contentious times at the State Capitol in Olympia.

Look! Some trees! We must be nearing Spokane, and so we are. Spokane is the largest city in eastern Washington, and the hub of millions of agricultural acres that occupy the terrain. It is the end of our trip to Washington and the site of one of the most interesting visitor features we have seen so far. Spokane has the most impressive urban waterfall anywhere. In the heart of the city flows the Spokane River. On the Spokane River resides Spokane Falls.

Thousands of gallons a minute flow over the rugged rocks on the bottom of the river. The City of Spokane used to be called Spokane Falls. Little wonder. In our opinion, they should go back to the original name.

We will spend the night at the gorgeous Hotel Ruby for $76 a night. Prices are lower on the east side.

We sincerely hope you enjoyed our trip through Washington. Tucked away in the far northwestern corner of the country it doesn’t get the attention it deserves. We think you will agree.

Technology: Crime in the Age of Social Media