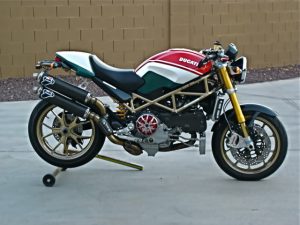 High-powered motorcycle riders! Listen up! Italian bike maker Ducati believes it can celebrate its Silver Anniversary and make your dreams come true in one fell swoop. Just announced, the Ducati Monster 1200 25° Anniversario is available for purchase worldwide. Decked out in green, white, and red livery, this is a special and limited edition bike. How limited? They are releasing exactly 500  Monster 1200 25° Anniversario edition bikes. How special edition? The Bandiera color scheme is inspired by 2008’s Monster S4RS Testastretta Tricolore, pictured right.

The paint job is complemented beautifully by an embroidered “25° Anniversario” saddle. The bike’s gold frame sports the model’s serial number 1-500, along with a pair of Marchesini w-spoke wheels. The clutch and braking levers are composed of shiny aluminum. The mudguards, keyhole cover, and plate shield are made from carbon fiber. The mirror casings and handlebar weights are machined.

The frame is completed with the model’s typical single-sided swingarm and adjustable fork. The 25° Anniversario is powered by the same Testastretta L-twin Desmodromic engine as the Monster 1200S rated at 147 hp and 91 lb-ft of torque. Can you say the Monster 1200 is a brutal and powerful beast? Yes, we thought you could. 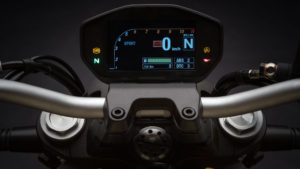 Three riding modes are available on the Monster 1200. The rider chooses the mode of his/her choice by using the digital tool cluster available on the touchscreen. The modes are sport, touring and urban, which provides the softest and most comfortable ride. Touring offers a compromise between comfort and performance. Sport is for those rides when you are laying out on the corners and tearing up the pavement behind you, proud to be aboard this magnificent machine.

Now, we started out by saying that the Ducati Monster 1200 25° Anniversario is available for purchase worldwide. That is technically correct, in that you can buy one from any country in the world. However, Gildshire found out this week that buyers in the United States who BUY the bike will not RECEIVE the bike until November. Until then, it goes down as a pre-purchase.

Will that matter? It shouldn’t, because the anticipation of the fruit only makes it that much sweeter on the tongue. It’s true for strawberries. It’s true for this bike.