Philadelphia is famous. It has as much history as any other city in America. It commemorates a fictional character at the Philadelphia Museum of Art with a statue of Rocky Balboa. Philadelphia birthed such notables as patriot/seamstress Betsy Ross, broadcast giant William Paley, and serial killer Ted Bundy. What it hasn’t had, though, is a Super Bowl champion. That is, until this last Sunday. In one of the truly thrilling Super Bowls in the 52-year history of the game, the Philadelphia Eagles defeated the favored New England Patriots 41-33. Expect one of the great parades in American history down Broad Street this week.

Coming into Super Bowl LII, the Eagles and Patriots were Top Ten in points allowed on defense. One would never have guessed that to be the case. The two teams broke the Super Bowl record for yards gained before the third quarter came to an end. By the end, they broke the same record for all playoff games in league history.  Patriot quarterback Tom Brady threw for 505 yards on his way to suffering his third defeat in The Biggest Game. Eagles quarterback Nick Foles threw for 373 yards on his way to game Most Valuable Player. 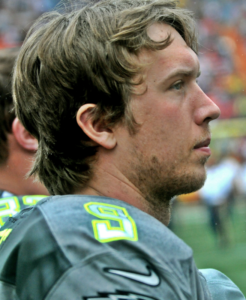 The Eagles broke on top first. That isn’t a surprise as the Patriots are famous for slow starts and fast finishes when competing in the Super Bowl. When Eagles’ Head Coach Doug Pederson called a risky pass to Foles (not from…to) on 4th and one before the half, he was acknowledging that this would indeed be a shootout to the end. His gamble paid off and Philadelphia was up ten at intermission.

A half hour later (after Justin Timberlake shimmied his way further into the hearts of his legion of fans) New England took the second half kickoff and promptly scored, drawing to within three points. After that, the two teams seesawed up and down the field, with offenses dominating defenses at an ever-increasing rate. Foles to Ertz for a touchdown. Brady to Gronkowski for a score.  The scoreboard numbers spun like a slot machine.

Some games draw their excitement from the end of a game. While that wasn’t the case in Super Bowl LII, the end was, in fact, a frenzy. Late in the 4th quarter, Foles hit Ertz at the three-yard line. The big tight end tumbled into the end zone, dropping the ball as it hit the ground. After review, the play was ruled a touchdown and the Eagles were up by five.

Philly’s two-point conversion attempt failed. Tom Brady was down by less than a TD with 2:21 on the clock and one timeout at his disposal.

There wasn’t a football fan in America who didn’t believe Brady would navigate the field and score, probably with almost no time on the clock. That is his way. Ask the Atlanta Falcons, who succumbed to New England in Super Bowl LI, one year ago. Even behind by five, tens of thousands of Patriot fans were polishing up their parading skills, while the same number of Eagles’ fans were chewing their nails. At least, if they are honest.

“We need just one defensive player to make a play!” Those were the words of one fan who could only pray his team would #flyeaglesfly. He could scarcely hope his prayer would be answered. After all, this is Tom Brady of whom we speak. He’s the G.O.A.T. (Greatest of All Time.) The combination of Brady and Head Coach Bill Belichick don’t lose to mortals. 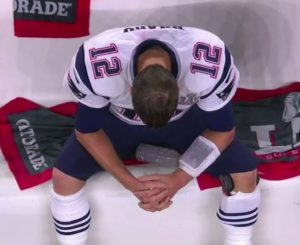 Brady was sensational, but his team fell short.

Except on this day they would, just as they have twice to the New York Giants in Super Bowls past.

The fan calling for a defensive play got his wish on the Patriots’ second play from scrimmage. After failing to sack Brady for 57+ minutes, Eagles’ defensive end Brandon Graham finally got to him. The hit bounced the ball out of Brady’s hands and Derek Barnett pounced. Was this the death knell?

The Eagles failed to score the TD kill shot, settling for a field goal, giving Brady one more chance. The newly-crowned NFL MVP got the ball back with about a minute on the clock, down eight, with no timeouts. He drove his team to midfield with nine seconds on the clock and hurled a Hail Mary toward the ceiling. The ball was tipped once and tipped twice, only to hang tantalizingly in the air before falling to the turf. As the clock struck midnight on New England’s hopes and dreams, the stadium clock read 0:00. The game was over, and the Eagles were champions of the world.

A few minutes later, Nick Foles thanked God and his teammates for this one shining moment. It is one he will not soon forget. Nor will a half million revelers on the streets of Philadelphia late into the night.

For New England, their future is without their offensive and defensive coordinators, both of whom will be named Head Coaches this week. But, their fans know that Brady and Belichick will be hard at work Monday morning. This is their third Super Bowl loss. Those who decide legacies will take note.