With its cobblestone streets and gorgeous architecture, the city of Brussels  – capital of Belgium – is quite a sight to behold. If you are lucky to find yourself there, be sure to sample Belgium’s two types of waffles. It won’t be hard to find a cafe or stall making them. Waffles are Belgium’s most iconic dessert. What makes them special?

From the Middle Ages to the World’s Fair

Belgians were making waffles way back in the Middle Ages. They were street snacks served outside Brussels churches, and primarily made from barley and oats, since those were the main crops. Waffles remained popular through the centuries, but weren’t properly introduced to North America until 1964. Maurice Vermersch, a man from Belgium, brought them to the World’s Fair that year. Everyone loved them.

Though not as well-known in the States, the Liege waffle may actually be more popular than the normal Belgian waffle in its home country. The Liege is a much sweeter waffle thanks to the pearled sugar topping, which gets crispy and caramelized as the waffle cooks. The waffle is also lighter and made with a brioche-like dough. It originated in the Wallonia region in the city of Liege. Legend has it that in the late 18th century, the prince of Liege asked his chef to make something using pearl sugar, which was new. The chef made a waffle, pleasing the prince, and the dessert was born.

According to the website Waffle Recipes, however, this story doesn’t hold up because pearl sugar was really expensive and not used very much at the time of the Liege’s waffles supposed creation. Even if the prince did have his chef make him Liege waffles, they would have remained a royal secret and not transitioned into a popular street snack. It’s more likely that Liege waffles were invented in the 19th-century.

How to eat the two types of waffles

Belgian waffles, the kind that the Vermersch family made, are crispy, with large pockets, but those aren’t for maple syrup. Maple syrup is a distinctively North American ingredient, so traditionally, Belgian waffles are either served plain, dusted with powdered sugar, or with strawberries and whipped cream. Vermersch’s waffles were so popular, he needed to hire ten people whose only task was to slice strawberries. In Brussels today, waffles are served pretty much the way they always have been, sans maple syrup, though you can find cafes that try to appeal to more American tastes with ingredients like Nutella.

The Liege waffle, however, remains pretty pure. Because the waffle is so sweet on its own, you won’t find much in the way of toppings. Both types of waffles – Belgian and Liege – are meant to be eaten just out of your hand, wrapped in a paper. No knife and fork necessary. 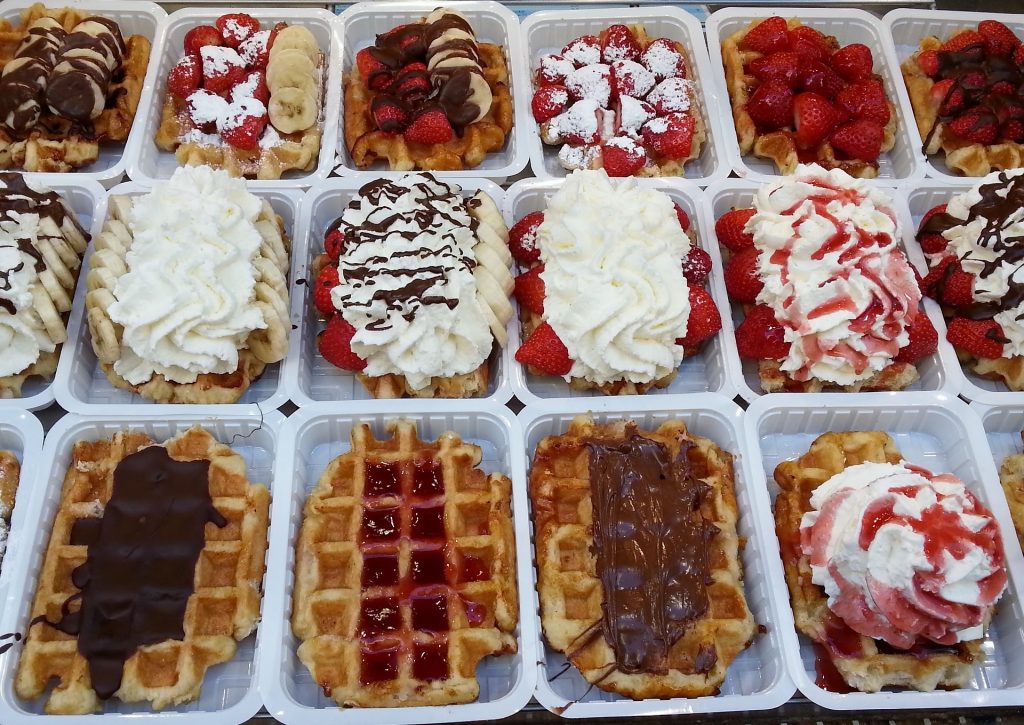 Where to eat waffles

If you want to have the option for waffle toppings, check out Le Funambule, a self-serve waffle spot. Expect giant clouds of whipped cream, mountains of powdered sugar, strawberries, bananas, rivers of caramel and chocolate, and more. If you just want a traditional, plain waffle, it’s only 1 euro or so.

Belgian may have created two types of waffles, but North American has a claim to pancakes. Click here to read about the best diner pancakes in the United States.

GM’s Marketplace App Can Find a Parking Place For You