“The Night the Lights Went Out in Georgia” is small potatoes compared to what is about to occur. A once or twice in a lifetime event is going to take place in the summer sky, and the nation is agog. Called “The Great American Eclipse” the sky-show will be partially visible a few places elsewhere, but this is really our spectacle. It starts in the morning hours of Oct. 21 and will run for about two hours.

The tourist impact is astonishing. An estimated one million people from California, Washington, Nevada, and Idaho are going to descend on the State of Oregon to witness the event. Border towns across the country are steeling for the influx.  To say, “this is a big deal” is to understate the phenomenon.

Where can you go to see the show? That’s Gildshire Magazines‘ task for today, however, it comes with a traveler’s caveat. Usually, we recommend places to stay overnight, but hotel chains have jacked up their prices to a degree that is borderline criminal. The sixth highest rated hotel in Nashville is charging $2000 for the night of Oct. 20. We won’t be party to such nonsense. You have slept in your car before and can do it again.

We will, however, tell you where to drive. Plan to leave early, and then leave earlier than you planned. The Washington State Department of Transportation (WSDOT) is recommending that people leave the state by Sunday morning if they want to get to a prime spot in time, and the same rules apply across the country. Here are the places to consider:

Madras, Oregon is one of the first towns to see the eclipse.

Madras, Oregon: This high-desert town of not-quite 7,000 residents should be cloud-free on Oct. 21. The eclipse starts at 9:06 and comes to peak fruition 73 minutes later. Madras is celebrating the event with concerts and a NASA-sponsored set of exhibits. The nearest commercial airport to Madras is 31 miles south, in Redmond.

Stapleton, Nebraska: Actually any of the towns in the sand hills of Nebraska would make a good viewpoint for the eclipse. Look to Stapleton (pop. 306) for a spot of ground to pull up and call your own. Tryon, Nebraska is a good spot if you want to avoid the congestion of Stapleton, because there are only 157 people there. The eclipse begins at about 11 a.m. and comes to a peak at 12:54 p.m. The nearest commercial airport to Stapleton is 205 miles west, in Scottsbluff. 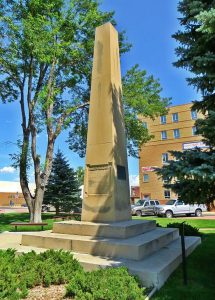 Casper, Wyoming: The high altitude (5,150 feet above sea level) of Casper makes any celestial event a spectacular one, and the eclipse is no exception. Casper is always up for a party and is putting on the 2017 Wyoming Eclipse Festival to celebrate the day. The peak of the daytime darkness takes place at 11:42 MDT. Casper has its own commercial airport.

Wathena, Kansas: If there is a state over which the eclipse is going to fly most profoundly, Kansas would be the one. The 1,313 residents of Wathena, along with eclipse-loving friends out of the woodwork, will see a total eclipse for 158 seconds. That is one of the nation’s longest views. However, folks in White Cloud, Troy, Severance, Robinson, Hamlin, and Denton (all in Kansas) will get a show almost as long. The closest commercial airport to Wathena is 59 miles SXSE, in Kansas City.

Carbondale, Illinois: Southern Illinois University (Go Salukis!) is taking this eclipse business and running with it. For $25, viewers can go to the football stadium and see an exhibit put on by NASA. People who prefer to watch the covered sun in solitude should go to Shawnee National Forest, southwest of town. The nearest commercial airport to Carbondale is 49 miles south, in Cape Girardeau, Missouri.

Hopkinsville, Kentucky: Just north of Hopkinsville is the epicenter of it all! That’s where astronomers predict the longest-duration of darkness.

Viewers can park on the side of Cerulean Hopkinsville Road (Route 624) and get a full 164 seconds of mid-day darkness, beginning at 1:24 p.m. CDT. The eclipse will begin to occur just before noon. The nearest commercial airport to Hopkinsville is 71 miles south, in Nashville.

Where ever you choose to go to see the eclipse, put your hurrying pants in your suitcase and don’t bring them out until it is all over. Enjoy the experience and be kind to one another. If you fail to be kind we won’t allow the sun to come back and you should know that Gildshire has that kind of power. Protect your eyes, because you’ll need them long after the sun has re-taken control of the sky.

Garden, Landscape, and Yard Trends for Style and Beauty