Electric Car Warning Noise May be Shelved By Feds

An electric car runs silently. A hybrid car runs quietly. Those are nice perks for drivers and passengers but are considered hazards for sight-impaired pedestrians. Just before leaving office the Obama Administration enacted a safety rule to safeguard them. According to Hybrid Cars, current rules require that new hybrid and electric cars with a GVW (Gross Vehicle Weight) rating of 10,000 pounds or less have to give off sounds. The National Highway Traffic Safety Administration proposes that automakers have until Sept. 1, 2019, to include sound warning devices on new hybrids and EVs.

A change of Administration in Washington means an adjustment of priorities, and the Trump Administration vows to be friendlier toward big business. According to The Drive, the new Administration may well scrap the noise-mandating directive. As a result, blind and near-blind pedestrians would do well to invest in rosary beads and pray their way across the street. 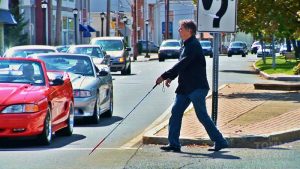 Every new vehicle regulation causes squeals of dismay from the carmakers. The Big Three claimed, in the 60s, that seat belt requirements would bring the industry to the brink of bankruptcy. The mid-brake light (in the car window), fuel standards etc. They were too burdensome for the carmaker to absorb, or so we were told. Yet, the industry survived. The new rules made cars safer.

There is little doubt that the proposed electric car noise requirement will save lives if enacted, and price ought not to be an issue. Industry experts expect the new rule would add about $130 to the price of a hybrid, while an electric car would see a $55 sticker price increase.

If the Trump Administration drops the new requirement, it will be a symbolic gesture to the President’s supporters in the Rust Belt. His strength in the States of Michigan and Ohio were key to his ascension to the White House, and regulatory reform was a part of his stump speech, especially in Michigan.

In the next few months, observers will learn the final decision with respect to the regulations. Car enthusiasts will read the results. Those most affected, though, will have the results read to them, and that’s unfortunate, to say the least. Watch this space for further developments, since Gildshire Magazines will be on top of developments as they break.

Independence Day to See Record Number of Cars on the Road