Home » Our World » Elon Musk is Building an Electric Submarine?

Elon Musk is a different sort of guy. I think we can all agree on that. A visionary who built a better electric car than anyone else, he has also been known to spout nonsense and non-sequiturs that confound his fans, confuse his followers and cause his stock prices to swing in wide arcs. Gildshire believes that Mr. Musk will either rule the world or destroy it. We see no middle ground. (That’s mostly said tongue in cheek, but not entirely.) At any rate, Elon Musk’s shareholders’ meetings are always entertaining, and the one that he just held was no different. After talking about some bottom-line business, and some electric car stuff, Musk casually dropped into the conversation that he has plans for an electric submarine. Obviously, this piqued Gildshire’s interest. We enlisted the help of Car and Driver for some of the research.

An electric submarine? I don’t know what to think about that?

Yes, that was our initial thought. But, we know that it isn’t unusual for Elon Musk to fire off surprising, controversial remarks that leave followers of the electric automaker with furrowed brows. But, to casually introduce the idea of a personal submarine into the equation was odd, even for the iconoclast inventor. 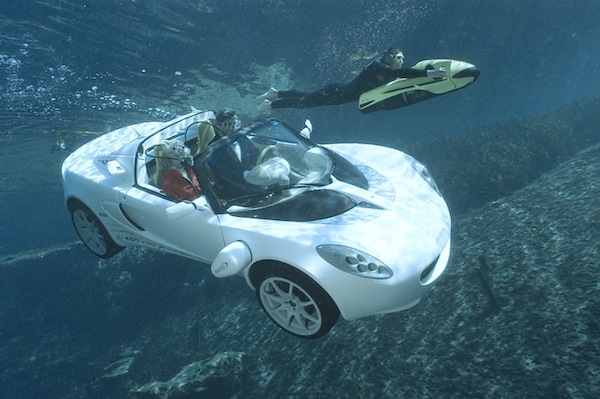 Would an electric submarine by Tesla look like this?

Apparently, this idea that we can only describe as “zany” wasn’t just offered up completely randomly. For some unknown reason, a shareholder specifically asked whether Musk’s Tesla Inc. is working on a vehicle that is capable of both sea and land travel. Was it a planted question? We don’t know the answer.

Who asks such a thing? Why not ask if the Tesla Model S can cure cancer?

Those were kind of our thoughts, as well. In fact, the entire topic was more than a little surprising given that Tesla (the car that is…not the submarine company) just recorded its first quarter of profit! It would seem that putting another good quarter together would be Job One.

Things have not always run smoothly in Tesla-land.

No, they have not. There have been rough patches in the construction of the gull-wing doors on the Model X. Perhaps even more disturbing is that the Model 3 (that was supposed to be the affordable Tesla), never turned out to be as inexpensive as it was advertised…and it wasn’t even close.

So, why a submarine if the doors aren’t right and the prices are way off?

Good question, but more likely than not, it will turn out to be another “what if” idea that crossed Musk’s mind. He has those, you know. The beautiful mind often does. However, even for Elon Musk, an electric submarine is a stretch.

So, there won’t be an electric submarine in a driveway near me?

Probably not, but if there is, please see if you can get a ride-along for Gildshire. The idea of an electric submarine for personal use is so far beyond a Bucket List that we can’t stand it.

Obviously, you can count on Gildshire to be on top of it if any news breaks about personal under watercraft. But, we know for sure that there is never a dull moment in the mind of Elon Musk.