A thin blue light adorned the stage of this Brooklyn concert hall. Overlaying the scene was a single note, played in the key of C-Minor. Suddenly, the lights flashed and out of the blue haze stepped Evanescence! Beginning with Amy Lee’s plaintive wails on “Everybody’s Fool,” through the encore covering Michael Jackson’s “Dirty Diana” it was a night of celebration for Evanescence fans at King’s Theater. Between those two musical pillars, the air in the room was rent in two by hit song after hit song. “Going Under” followed “What You Want.” “My Heart is Broken,” preceded “Made of Stone.” Mid-concert, the band trotted out their newest sound as an acoustic version of “Even in Death” entertained the crowd. Gildshire’s Lev Radin was on the scene, with camera in hand.

Founded in Little Rock, Ark. in 1995, the band came to prominence at the dawning of the new Century. They released their first full-length album, “Fallen,” in 2003. The album sold a whopping 17 million copies worldwide, resulting in two Grammy Awards out of six nominations. Building on the momentum generated by “Fallen,” Evanescence produced a live album one year later. Titled “Anywhere But Home,” the live album preceded “The Open Door,” which was a studio album. Between the two albums, the group realized over six million sales, leading to great name recognition. 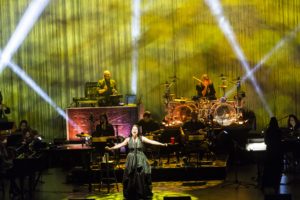 The band maintained high popularity marks throughout that decade even though the makeup of the group was fluid, to say the least. Keyboardist/vocalist David Hodges left the group before “Fallen.” In 2003, co-founder Ben Moody left the group mid-tour. Bassist Will Lloyd, guitarist John LeCompt and drummer Rocky Gray exited soon thereafter. Evanescence fans stayed loyal, even though none of the studio albums had the same players.

What kept the fans in place? Actually, the better question is, who kept the fans in place? As it turns out, the talents of mezzo-soprano Amy Lee is the glue that holds the group’s popularity at such a high-level. Her work on “The Open Door” resulted in the group’s first Billboard Number One ranking on the Top 200 album chart. Ms. Lee’s stage presence, vocal power and will to succeed benchmarks the Evanescence sound. She uses her considerable talent as alternating sledgehammer and scalpel, evoking every emotion from her fan base over the course of a two-hour concert.

Eventually, the strain of recording, touring, and integrating new members began to wear on the group. After a sold-out show in London’s Wembley Arena at the end of 2012, Amy Lee announced a hiatus. As it turned out, the recess would last a number of years.

Now, touring in support of their latest album, “Synthesis,” the group comes out of their break and enters a new musical style. As revealed by Amy Lee, the new album is a significant and intentional departure from the group’s earlier work.  Orchestral music and electronica take the lead in a new and relatively more thoughtful musical approach. Though a change from what they have done before, the shift only builds on the group’s aversion to being channeled into any one genre. 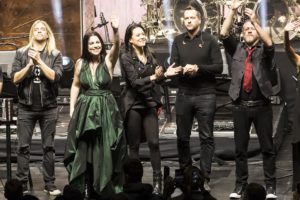 Are they a rock band? Are they a metal band? Not exactly in either case. While there have been some critics who have slotted Evanescence into one of those two groupings, neither is correct. Most accurately, Evanescence is a goth metal group. This categorization came as a surprise to Christian music producer Terry Hemmings, who understood, back in 2002, the group to be a Christian outfit. Not so, asserts Lee, who lists, among others, Bjork, Nirvana, Nine Inch Nails, and Garbage as musical influences. Other genres used to describe the group’s sound include “industrial rock,” and “progressive metal.”

The band’s “Synthesis” tour began in Las Vegas, concluding Dec. 15 in Reno. Just revealed by the group, a European tour in support of the album will take place, as well. The Euro-trip begins in March of 2018 and includes 18 concerts in a two-month span. Tickets to the shows, both here and abroad, are available on Stereoboard.