Home » Our World » The Most Exciting Historical Discoveries of 2017

Every year, archaeologists and researchers unearth new and compelling historical finds that better shape of our knowledge of the recent and distant past. From a dinosaur that resembles a stone dragon to the “Wonder Woman” of the Viking age, here are five of the most exciting in 2017:

110 million years ago, a dinosaur drowned. The body slowly sank, creating a crater as it hit the seafloor. Sediment quickly buried it, and it became fossilized. In 2011, scientists uncovered the giant creature. Its near-perfect preservation shocked them. It possesses rare features such as fossilized skin, and after cautiously chipping away at the 15,000-pound rock the fossil was in, the final result looks like a sculpture. In 2017, the public saw the plant-eating nodosaur for the first time.

Fruitcake, usually reserved for Christmas and enjoyed by only a few, is a perfect food for voyages to the Arctic. This year, researchers discovered a fruitcake about 100 years old. Initially, they thought they had just found a tin. After carefully removing the broken pieces and unwrapping the paper, they found a very well-preserved fruitcake that still smelled sweet. It’s likely that British explorer Robert Falcon Scott left the cake behind after breaking camp in a hut at Cape Adare, East Antarctica, one of the coldest places on earth. 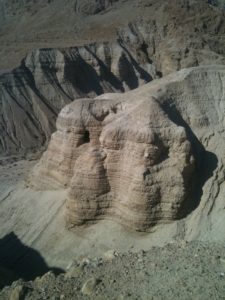 One of 12 Qumran caves, where the Dead Sea scrolls have been found

In the West Bank in Israel, researchers have been hunting for more of the oldest Biblical manuscripts, known as the Dead Sea Scrolls. In February, they began exploring a new cave. It had been caved in, but they found a tunnel that seemed to have been purposely created. They found broken jars, lids, and fragments of leather and string, which would have been used to bind scrolls. They also found pickaxe heads, indicating that looters had stolen scrolls in the 1950’s, as archaeologists theorized. One of the jars was intact, with a rolled-up blank scroll inside. Though archaeologists didn’t find any actual Dead Sea scrolls, the exploration of this 12th cave is the closest they’ve gotten in 60 years. 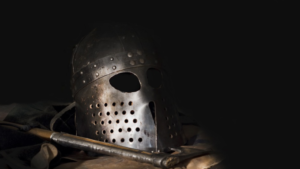 In 1889, archaeologists believed they’d found another Viking warrior grave when they unearthed 1,000-year old bones surrounded by shields, weapons, and the skeletons of two horses. They assumed the warrior was a man, but this year, a DNA test confirmed that this warrior was actually a 30-year old woman. She is the first female Viking to be buried with zero domestic items and only weapons, including a gaming board complete with pieces, which has only been seen in the graves of military leaders. The position of her grave also implies she was important, because it’s elevated near a hilltop fort.

Fossils that question the date of human origins

In 1961, scientists dug up fossils they originally believed were of Neanderthals about 40,000 years old. Later, they were identified as Homo sapiens aged about 160,000. This year, new evidence like more fossils and stone tools suggests they might be even older, which would push back the origins of Homo sapiens – modern humans – by over 100,000 years. The debate right now is whether or not the human fossils can be truly be considered Homo sapiens, or if they are some other earlier species.

Sometimes, archaeologists find strange things in their work, like paw prints or funny graffiti. Here are some of the oddest ones.