Isabella Stewart Gardner Museum Stolen Art: An empty frame remains where The Storm on the Sea of Galilee was once displayed. Picture provided by the FBI showing the empty frames for missing paintings after the theft.

Isabella Stewart Gardner dedicated her life to the arts, once said to be “one of the seven wonders of Boston.” Through Google Arts & Culture, anyone can virtually take a tour that tells the story of the museum’s stolen art.

Who was Isabella Stewart?

Gardner was born and raised in New York City to a wealthy family. She met and married her husband, Jack Gardner in New York and then they moved to his hometown of Boston. They had a son who sadly died before he turned two years old due to pneumonia, which caused Gardner to sink into a depression. Her doctor suggested she travel in hopes that could rouse her from her sadness. As it turned out, Gardner reveled in travel and took many trips around the world with her husband.

At home in Boston, Gardner began attending readings and art events, ultimately leading her to begin collecting rare books, manuscripts, and fine art. As her collection grew, she and her husband decided that their ambition as collectors needed a larger space than what they had. This was their first inclination to form a museum.

Gardner moved into the fourth floor private living quarters in the museum once completed in 1901. Sadly, her husband passed before the museum opened. Gardner herself personally arranged every piece of her collection, from rare books to tapestries. She continued to grow and adapt her collection until the last days of her life. Besides physical art, Garnder organized concerts, lectures, exhibitions, and opened the museum to all artists. Upon her death, she left an endowment to keep the museum open “for the education and enjoyment of the public forever.” She stipulated that nothing ever change in the galleries. In addition, she stipulated that no items should be sold from or acquired for the collection.

Who stole the Gardner paintings?

On March 18th, 1990, a pair of thieves entered the museum disguised as police officers in the wee hours of the morning. They handcuffed the security guards and proceeded to steal 13 pieces of art in 81 minutes from the first and second floors. Captured by the motion detectors in the museum were the exact movements of the thieves. 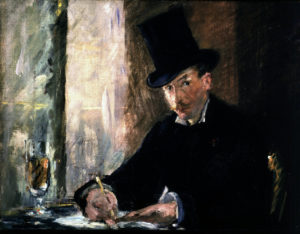 The virtual tour begins by taking us past the courtyard into the Blue Room. This is a small gallery filled to the brim with paintings. The single painting taken from this gallery was Chez Tortoni by Edouard Manet. This painting, of a young man writing a letter at a Paris Café, was the sole painting taken from the first floor. Making it more mysterious, it was also the only painting whose frame was not left hanging on the wall. The thieves left the frame sitting on the security director’s office chair.

Moving upstairs, the viewer comes to the Short Gallery, to the five works on paper by Edgar Degas taken. Gardner had special cabinets designed to display her collection of prints and drawings. The Degas pieces taken were from the cabinets. In addition to those five, also stolen was a bronze eagle finial. The eagle sat atop a framed Napoleonic glad Garnder had displayed high on one of the walls. The thieves actually attempted to unscrew the framed flag from the wall. They faced difficulty doing so because they gave up and just took the finial instead.

The best known pieces of art stolen were from the Dutch room, also located on the second floor. Four empty frames hang there to this day awaiting the return of the paintings that belong in them. Two paintings by Rembrandt cut from their frames were Christ in the Storm on the Sea of Galilee and A Lady and Gentleman in Black. Also taken from the side of a chest was a small self portrait by Rembrandt. Taken from its frame was a landscape with an Obelisk. This particular painting was thought to be by Rembrandt until it was discovered that it was the work of his pupil, Govaert Flinck, in the 1970s. It is possible that the thieves did not know this and in fact thought it was a Rembrandt.

The Concert by Vermeer was also taken from its frame. The painting was on the opposite side of the table where Landscape with an Obelisk was framed. It is the most valuable painting stolen in the entire world. Lastly, an ancient Chinese bronze Gu, or beaker, taken from a table positioned to the right of Christ in the Storm on the Sea of Galilee.

These thirteen pieces are a huge loss to the art community as a whole and the return of these works to the museum remains a top priority. The Museum continues to actively investigate the theft in partnership with the FBI and the US Attorney’s Office. There is a $10 million reward for information leading directly to the recovery of all 13 works of art.

If you have a tip, contact Anthony Amore, the Gardner Museum’s Director of Security, at 617 278 5114 or theft@gardnermuseum.org.

The Four Most Dangerous Workout Trends