The looks of each decade sure did change a great deal. The prevailing trends of the time in women’s fashion (and body shapes) reflected the role of women and lifestyles. If you are interested in learning how fashionable body types have changed throughout the years, continue reading this article.

This decade was the time of the flappers – women who wear little strappy dresses that were straight and came up above the knee for a flash of a garter. Being short was the ideal of this time, as well as rather flat-chested and having no curves. Louise Brooks was a well-known entertainer of that decade.

Fast forward a few decades to when women emphasized their full curves. Softness and a more voluptuous frame were popular then. The hourglass figure is one that many women wanted the most, and some even ordered “Bust Cream” through the mail. Marilyn Monroe is a well-known model and actress from this decade. 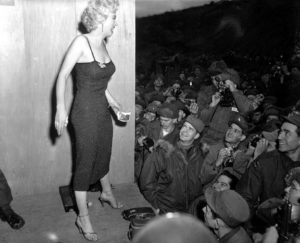 Body Shapes Change Over Time: Marilyn Monroe appearing with the USO Camp Show, “Anything Goes,” poses for the shutterbugs after a performance at the 3d U.S. Infantry Division area. Feb. 17, 1954.

There was pressure to be thin that began in the 1960s with models such as Twiggy. Curves were considered to be okay, but slim hips and a small stomach were ideal. This trend led the way for the fitness craze of the 1980s when some models put out their own fitness videos and spandex was quite popular. Leggy women who were a bit on the taller side were seen as the most beautiful in the 1980s. Aerobics became a big hit, so women were always trying to be more fit.

Supermodels were extremely thin, and this set the ideal to diet and work hard to maintain a trim figure. Athletic bodies were not so much “in” anymore. An androgynous, “waif” look was in all of the magazines and billboards.

Modern Looks – All about that Bass

Women love the big booty and relatively curvy look now. Body positivism is all over the place, with a trend towards accepting everyone for what makes them uniquely beautiful. Workouts that focus on increasing arm muscles and toning the rear area are extremely popular.

How Grandparents Can Influence the Upbringing of a Child