I don’t have many heroes. Sports stars, celebrities, and political leaders come and go, all with feet of clay in the final analysis. When you uncover the heart beneath religious leaders they tend to disappoint more than inspire. Those who make a real and lasting difference in the world are few and far between. Malala, the Pakistani activist for female education and the youngest Nobel Prize laureate is a hero. As a child, she was shot in the face for a heinous crime. She wanted to learn. That’s heroism. Hanna Bohman is  hero, as well. Gildshire Magazines wants to introduce you to her and the documentary movie that tells her story and the story of the YPJ women’s protection units fighting against ISIS. It’s called “Fear Us Women.” 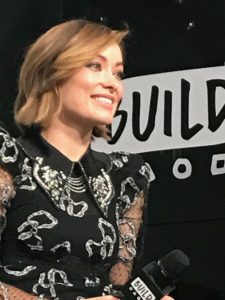 Hanna Bohman is a beautiful woman. Normally, in a story such as this one, we wouldn’t make a note of that, because her work is of paramount importance. In this case, though, Ms. Bohman’s physical appearance tells part of her story. You see, she had a booming career as a fashion model in Vancouver, British Columbia. Until, that is, she became a soldier in the international war against the terror group ISIS. “Fear Us Women” chronicles Hanna Bohman’s transformation into a member of the YPJ fighting force feared throughout war-torn Syria.

Most stories of female soldiers briefly touch on their female-ness before moving away from the topic. Not so in the case of “Fear Us Women.” You see, being a woman is an important part of Hanna Bohman’s mission. As she says,

Ms. Bohman’s tattoo spells out her feelings about ISIS (she calls it ‘The Satanic State’) and it’s legendary ill-treatment of women. The tattoo says,

“They don’t deserve to live in my world.”

Just so everyone is clear, Hanna Bohman’s tattoo is both Arabic and English. She wouldn’t want the message missed due to a language barrier.

The story of how Hanna Bohman went from model and store clerk to scourge of the ultra-patriarchal society known as ISIS is surprisingly simple. She heard about people from the west deciding to join ISIS. That made her mad but, more importantly, it made her think. She wondered, if it is possible to volunteer to fight WITH ISIS, why couldn’t someone volunteer to fight AGAINST ISIS. As it turned out, you can.

“Fear Us Women” details the kind of of training these women go through before riding head first into the fray. After volunteering for the YPJ, they smuggled Ms. Bohman into Syria. She knew that time was of the essence and that the training period would be sped up.  She thought a boot camp as short as five days might be in order.

“It was about four hours of training,” she says. “Luckily I knew how to shoot a gun.”

Actress Olivia Wilde was sufficiently moved by Hanna Bohman’s story to come on board “Fear Us Women” as an executive producer of the project. To Ms. Munn it is a story of courage, to be sure, but it is more than that. As Ms. Wilde told Build, it is a very human story of someone wanting to write a wrong directly, rather than just complaining about it from a distance.

It’s a short film. In fact, the documentary is three minutes short of a half hour, but the 27 minutes is full of impact. “Fear Us Women” is a sand-in-the-mouth look at the horrors of Isis and the confusing maze of politics in the region. Where it excels is as a matter-of-fact look at the experiences of the often unlikely soldiers who come together for the cause. This is a group of women as disparate as they come, fighting alone (and occasionally beside male fighters, but as equals rather than “auxiliary”) against a common foe.

“Fear Us Women” is worth finding at your local independent art-house theater or on TV. It is an important story that you will watch and say, “Hanna Bohman is my hero too.” We pretty much guarantee that.

Rosemary Kennedy and the Lobotomy