Fes el Bali and the Festival of World Sacred Music

The intellectual, cultural, and religious center of Morocco for the last 1,200 years, Fez offers many wonders. If you want to get totally immersed in the flavor of Old Morocco, Fez’s old town, Fes el Bali, will give you the chance of a lifetime.

An almost perfectly preserved medieval town whose donkey-wide, winding alleyways and covered bazaars are encircled by an unbroken line of magnificent ramparts and gates, Old Fez is the largest, and most confusing, medina in the Maghreb area of North Africa, once so large it was subdivided into twenty smaller medinas. 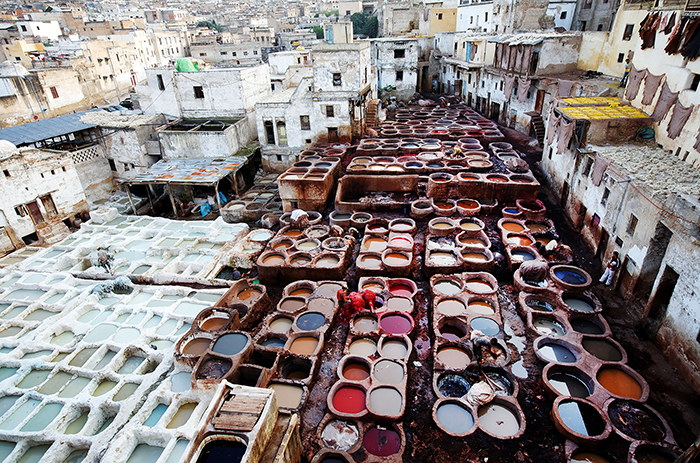 Crammed with every conceivable sort of workshop, market, and restaurant, it is a delirious assault of sights, sounds, and smells you are not likely to forget. Fes el Bali and its dye pits, tanneries, butcher shops, tiled fountains, mosques, and spice markets are best seen with a local Fassi guide. Even they some­times lose their way amid the maze of narrow streets—but it’s better than getting lost alone.

Apart from electricity, everything in the sacred city of Fez seems to belong to another century. You can keep the Ali Baba dream alive if you check into the Palais Jamai, a royal palace built in 1879, the only hotel within the walls of the medina. During the Fez Festival of World Sacred Music, another dimension is added.

Still in its nascent stage—and refresh­ingly uncommercial and movingly sincere for that reason—this unique music festival confirms that if themusic is the world’s universal language, sacred music is the universal language of the soul. You may hear local ritual Berber music, the whirling dervishes of Konya, choirs from Harlem performing gospel music, female Gregorian chanting from France, or ancient Judeo-Spanish lullabies.

The week long festival schedules at least two concerts a day in different outdoor venues in and around the magnificent city—Morocco’s oldest imperial capital— which include a 15th-century Moorish palace and the ancient Roman ruins of Volubilis, 35 mi/70 km outside of town. Fez is the perfect setting for evening concerts, which are interrupted only by the Muslim call to prayer and the song of swallows.

Bee-Aid: Planting a Garden to Help A Dying Species

When Healthy Foods Turn on Us