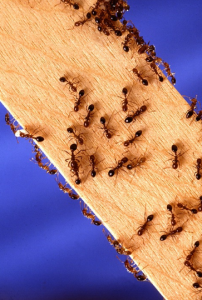 No one likes fire ants. They have incredibly painful bites, and can destroy everything from electrical equipment to crops. While native to South America, they are an invasive species that now live in New Zealand, the United States, Australia, and several Asian countries. Despite their status as a pest, this ant is a fascinating creature that continues to surprise scientists. The newest revelation: fire ants can build towers with just their own bodies.

Scientists have known about ant-made rafts and bridges. When their environment floods, up to 100,000 fire ants link themselves together and stay afloat on top of the water for weeks or even months at a time. Air bubbles get trapped between their bodies, so combined with the ant’s natural waxy skin that repels water, the ants stay above the water’s surface. If you were to try and push the layer of ants down into the water, they’re still able to float. This is good news for the ants in case sticks or other debris were to fall on them. 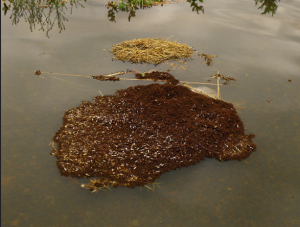 As they go about their business, ants also run into gaps that need to be crossed. They will also build bridges if they just want to avoid a longer trip; scientists observed ants bridging over a hole instead of taking the long way around it. This shows an impressive level of analytical thinking where the insects – as a unit – decide the shorter path is better because it allows them to move faster and spend more time gathering food. Ants are able to sense gaps, and will let the other ants know. By clinging together and allowing other ants to walk on top of them to cross, ants are essentially going across across the build as they are building it. Once the ants no longer feel as many bodies, they begin disassemble the bridge.

Scientists were studying rafts and bridges when they realized that ants could also build towers. They had ants in slippery containers so they couldn’t climb up, and went home over the weekend. However, after 3-day weekends when researchers came back, they found that their ants had escaped. They were found under another professor’s desk. When they couldn’t climb out of the bins, the ants had built a tower using their own bodies.

Ants aren’t very smart and they don’t have good eyesight, so scientists were surprised. To find out how they were making towers, they let the ants build, and used X-ray video and tracers to take a detailed look at the tower’s actual structure. The building isn’t organized and the towers are always falling and then being rebuilt. The ants will fall through the middle of the tower and then just keep climbing up along the sides. This happens so quickly, the tower is able to grow. The close look always revealed that the ants never let more than three friends sit on top of them. As soon as an ant finds itself atop another ant, they will keep moving randomly in every direction. 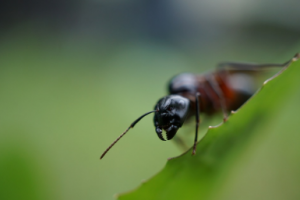 The fire ant is the ideal model for a swarm robot

Why should anyone but ant scientists care about how ants build stuff? They’re hoping to figure out more about how ants build, so they can apply the rules to robots. The field of “swarm robotics” consists of tons of tiny, simple robots that work together, and ants are a perfect model. There’s even a field within swarm robotics called “ant robotics,” where researchers build robots with sensors, the ability to detect objects, and infrared emitters. These tiny robots act just like ants. Swarm robots could be used to create self-healing materials, so when something goes wrong, the robots can fix themselves. In terms of application, these little robots could be used for disaster rescue missions, in war, and even within the human body.