Best Motorcycles For Under Five Grand

Home » Our World » Best Motorcycles For Under Five Grand

New car news comes about in late-summer and early fall. By Thanksgiving, everyone knows the best cars in each price range. It takes a little longer than that in the world of motorcycles. Makes and models trickle in over time. The lists of “Best” are longer in the making. However, now that all of the 2018 motorcycle models have made it to our shores, the list of “Bests” are underway, as well. Up first, the list of the best motorcycles available for under $5,000.  Gildshire’s Car and Motorcycle family did our due diligence to come up with our list. We separated the bikes into classes, while our friends at RideApart contributed to the discussion.

Cruiser Class, Honda Rebel 300: Pretty much every list of this sort that you run across will include the Rebel 300. It is just that good and just that appropriate as a starter-bike, or second bike in the garage. They’re great little cruisers with tons of style. However, the 300 also has a lot of customizing potential. Appropriate, since the $4,499 MSRP leaves some money to make this little bike your very own. Expect to see it on many lists of the best motorcycles at a bargain price. 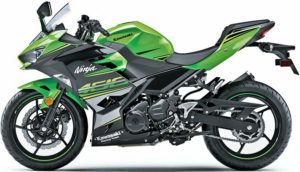 One of the best motorcycles for under $5,000 on looks alone? This one.

Sportbike Class, Kawasaki Ninja 400: John Candy said it best in “Stripes.” “I’m a lean, mean, fighting machine!” The Ninja 400 is a lean, mean, fighting machine, and it is all dressed up in green. What could be better? The Ninja 400 is a low-risk way to test the waters of motorcycling but offers enough satisfaction for owners as they build their sport riding resume. The little Ninja does push hard against our price category, listing at $4,999.

Standard/Naked Class, BMW G 310 R:  It’s agile, fast, aggressively styled, and looks fantastic. Oh, and did we mention it is a BMW? Most people believe it takes ten grand to purchase a Beemer, but this little number tells the tale. Some riders say it is an S 100 R that shrank in the wash cycle. However, we say, “Did you see that?” All at an MSRP of $4,750.

That’s our fave four. All for an amount of money you have in the cushions of your couch…if you picked up Bill Gates’ couch at Goodwill.

Most Unique Places You Can Rent With AirBnB