Five Easy Ways To Catch The Black Plague: When the Black Death – now recognized as the bubonic plague – ravaged Europe in the 14th-century, people were woefully unprepared. Doctors knew nothing about germs, so their methods for avoiding the plague were anything but effective. In fact, a fair number of them might have extrapolated the spread of disease. Here are five ways to get sick.


This is not actually a bad idea. The city of Venice began turning away ships that came to port, believing that the plague might be onboard. Any ships that did dock had to isolate their crew for 40 days, creating the term “quarantine.” Unfortunately, the plague had already been in Italy for a year when the government started quarantining, so it was too little too late.


Medical professionals believed that the plague was caused by bad air. You might be familiar with the creepy bird-like masks that physicians wore. These masks were containers for various oils and spices. People would also burn incense to try to clean the air. While it clearly didn’t work during the plague, subsequent research has shown that certain essential oils can kill germs.


In the 14th-century, religion reigned over science, so many believed that God’s wrath was responsible for the plague. To avoid getting sick, people would roam from town to town, flogging themselves, and praying for mercy. Of course, traveling spread germs, and the open wounds probably didn’t help prevent sickness either. 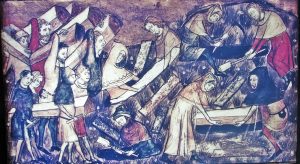 Ways To Catch The Black Plague: Exhibit depicting a miniature from a 14th century Belgium manuscript at the Diaspora Museum, Tel Aviv The museum note says “The citizens of Toumai bury their dead during the black death. Miniature from the manuscript, Belgium, 14th century.”


During the Black Death, governors began to hunt down and murder Jews, blaming them for the disease. They had noticed that Jews were less likely to get the plague and concluded that it was because they were causing it. In reality, Jews were probably avoiding the plague because the Torah upheld cleanliness, which was not as important to other Europeans.


If you want to catch the bubonic plague, the best way would be to surround yourself with human waste. Because people thought the air was infected, they decided that the stench-clogged air of the sewers would drive out the “bad” air. Not only did living in sewage weaken the immune system, leaving a person vulnerable to the black plague, but they were likely to catch lots of other nasty diseases.

How to Build Confidence and Become Trustworthy

7 Steps to Get Glowing Skin

What is Mindfulness Psychology?