Pilates has gained a lot of momentum in the last decade or so. What is Pilates exactly? Is it different than yoga? How did it get started?

Fact #1: Pilates was created by a German athlete who first taught what would become pilates while imprisoned in a British internment camp.

Joseph Pilates, born in 1883, was one of many who were put in internment camps by the British during World War I. There, he began to teach his fellow inmates a variety of animal-inspired movements and stretches that only required mats, since the inmates didn’t have access to other equipment.

In 1954, Pilates published his book, “Return to Life Through Contrology,” which is what he originally called his exercise regimen. The book includes 34 poses such as “the scissors,” the “neck-pull,” and “the saw.” Pilates demonstrated each of these poses himself through photos in the book. He was 59 at the time.

Fact #3: The key difference between Pilates and yoga is that pilates is more focused on physical fitness.

While doing yoga can make you fit, it also an emphasis on a mind-body connection that Pilates doesn’t. Pilates is designed solely for fitness and isn’t intended as a companion to meditation like yoga often is. While both prioritize breathing, yoga focuses a lot more on the mind-body link of the breath than pilates does. 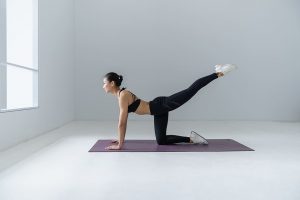 In terms of the actual physical differences between pilates and yoga, you stand a lot more when you do yoga. When you do pilates, you can expect increased core strength, better flexibility, and better posture. Pilates is especially good for people who struggle with back pain.

Fact #5: To make the most out pilates, it’s best to take one or two classes from a professional.

Pilates might seem easy, which makes it so popular as an at-home exercise. However, to get started on the right foot, it’s a good idea to take one or two classes with an actual person who can correct your positions and answer any questions. This way, you can be sure you’re doing the basic moves right and get the most out of every routine.