Foods For Mediterranean Diet. The Mediterranean diet emphasizes a well-balanced food diet and way of life. It is typical of Mediterranean countries, and it is widely regarded as the healthiest and most practical eating model. Numerous studies have linked it to a variety of health benefits, including reduced risk of heart disease, metabolic syndrome, and type 2 diabetes, as well as slowed aging and cognitive decline.

The Mediterranean diet prioritizes food selection over calorie intake. Plant-based foods are at the top of the Mediterranean diet’s nutrition pyramid. They are the most important part of the diet in terms of quantity. As a result, caloric intake is a direct result of the type of food consumed in the diet; whether we like it or not, eating in this manner consumes a limited number of calories. As a result, we are spared from excessive calorie counting. Simultaneously, we’re talking about a kitchen full of fantasy, taste, color, and flavors, as well as delicious but low-fat cuisine.

Yesterday And Today – The Mediterranean Diet. What Are The Most Common Foods?

What is the Mediterranean diet, and how does it differ from other diets? What are the most important plant foods? Food categories are listed below in descending order:

Meat and red meat meals should be consumed in moderation, or only once in a while. Carbonated liquids, refined flour products with high sugar content, hydrogenated fats, and industrially processed foods should all be avoided. Surprisingly, items labeled “low fat” or “light” are also prohibited because the lack of one nutrient is compensated for by another which is detrimental. These are, after all, ultra-processed foods, which the Mediterranean diet avoids.

The Redesigned Food Pyramid And The Mediterranean Diet

This list is simply an updated version of the well-known food pyramid, with Mediterranean diet researchers adapting it to today’s lifestyle. Water, in significant quantities, and a number of linked activities, such as frequent physical exercise and socializing, including eating, were also added to the pyramid. The optimal calorie intake is approximately 60% carbohydrates, 25% protein, and 15% fat, whether we are talking about a single dish or numerous dishes during a meal. Alternatively, the Mediterranean diet can help here: if plant foods are the most important portion of a meal, this criterion is immediately met.

Using this criterion, however, anyone reading a menu may quickly determine whether it adheres to the Mediterranean diet’s principles. The reason for this is that a diet high in vegetables and fruits has a substantial amount of salts, vitamins, trace elements, antioxidants, water, and fiber. Also, it’s low in calories. Furthermore, because fiber is mainly insoluble, it aids digestion while requiring relatively little caloric intake. 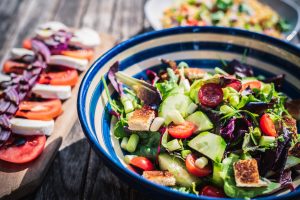 The Mediterranean diet – a well-balanced food diet and way of life.

What Is Not The Mediterranean Diet?

Many dietitians, however, point out that the Mediterranean diet is not the same as the massive servings of pasta smothered in delectable sauces that the collective imagination has implanted in our heads. A serving of pasta must meet a set of requirements in order to adhere to the Mediterranean diet’s principles: be wholemeal; be in small quantities (100 g dried pasta is already a substantial piece); be mixed with a variety of vegetables, perhaps greens, legumes; have a moderate amount of olive oil and only a smidgeon of cheese or meat.

Although wholemeal pasta, rather than refined flour, is a symbol of the Mediterranean diet, it is not required to include pasta. Bread, rice, couscous, bulghur, and other grains in the shape of grains are some of the carbohydrates consumed by people in the Mediterranean region.

How Did The Concept Come To Be?

Because no one in his country is a prophet, it took an American to see the importance of the Mediterranean diet. The narrative of how this diet was found and explained to the rest of the world is fascinating in and of itself. Angel Keys, an American scholar in the 1950s, was equally enthralled by her.

Angel Keys was in Italy for a United Nations meeting on nutrition when he overheard a lecture by a university professor from Naples. The incidence of cardiovascular disease in his area, according to the data supplied, was much lower than the percentages documented in the United States. This discovery prompted Keys to return to Naples to investigate the phenomenon. Then, after making contact with the locals, established a permanent presence in the area. More specifically, at Cilento, where he continued his research.

He next traveled to Madrid, Crete, and other locations, where his earlier findings were confirmed: the Mediterranean diet caused far fewer cardiac problems – the main danger – than diets in countries further north.

His multi-year study, Seven Countries Studies: A Comparative Study of Diet in Finland, Japan, Greece, Italy, the Netherlands, the United States, and Yugoslavia, was first published in the form of a book. The considerably reduced mortality rate caused by ischemic heart disease in the Mediterranean population was the initial conclusion to introduce the Mediterranean diet internationally.

In A House With A Garden, A Mediterranean diet

Ancel Keys and his wife Margareth Keys released “How to Eat Well and Stay Well, the Mediterranean Way” in 1975. At the time, it was a revolutionary book, both a scientific treatise and a culinary book. The recipes included in the book were tested in the kitchens of the two spouses’ homes before being included in the book. They spent 40 years in the garden house at Pioppi in Cilento. Making a mandatory commute to Minneapolis, Minnesota, in the United States.

“Margaret and I love to walk, we started harvesting olives, we have 80 olive trees and 75 citrus plants. We have oranges, apricots, pears, tangerines, and plums; we also have four apples that produce only one apple at a time. We also have kumquat and chinotto. You probably don’t know what a chinotto is. It belongs to the citrus family, it is redder than the mandarins and it grows in a very beautiful shrub, which produces many fruits from which an extraordinary marmalade comes out. ” That was the message Keys was sending to a buddy in the United States. The letter is on display at a museum dedicated to Keys’ work.

Mediterranean Diet – A Way Of Life That Is Environmentally Friendly

The following are some of the benefits highlighted by one of the many organizations that advocate the Mediterranean diet:

In a nutshell, the Mediterranean diet is a social and cultural legacy passed down through the years, a valued know-how, and a life philosophy based on healthy eating. 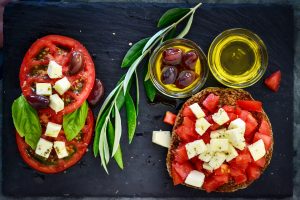 The Mediterranean diet is also a healthy diet for the environment.

The Most Important Health Advantages

In Italian, there are about 9 million references to the Mediterranean diet online, while in English, there are nearly 150 million. When we add in the other languages, we can see how much attention it continues to generate. So, what are the most important health advantages mentioned above?

First and foremost, there is a lower chance of heart and circulation problems, such as atherosclerosis and excessive cholesterol. At the same time, it lowers the risk of metabolic syndrome, which includes type 2 diabetes and high blood pressure, and it aids in weight loss and maintenance. It is a diet that aids in lowering the body’s overall inflammatory level. As a result, it works against stomach problems and cancers including breast cancer and colon cancer.

At the same time, the Mediterranean diet helps to prevent cognitive decline and aging by encouraging excellent circulation.

Yesterday And Today, I ate A Mediterranean Diet. What Has Changed?

The Mediterranean diet was first investigated during the postwar years when poverty was still prevalent. It was, in fact, a poor man’s diet, devoid of meat and animal fats. Simultaneously, the same modest material circumstances meant that calorie intake was generally restricted. They didn’t go overboard with the cheeses or the amount of food. Fish and beans were the main sources of protein.

Intensive agriculture provides the majority of today’s food. The industry operates at a high level of efficiency and at a reasonable cost. As a result, there is a market full of “pleasant” products that are easily accessible but raise health concerns. As a result, ingesting them carries a danger. In reality, eating healthy is typically more costly in terms of both time and money.

However, there are always options. If everyone wants to follow the Mediterranean diet principles as closely as possible, they must develop their own solutions. Shopping for non-perishable food once a month and fresh food once a week is an easy option.

We have extra time to cook because of our excellent organization. The second crucial step is to arm ourselves with a set of broad guidelines and simple meal pairings. We can also be inventive by combining protein and vegetables or carbohydrates and vegetables. We also have a lot of options for combining natural plant meals with salads. We save twice as much time and eat healthily numerous times in a row if we wash them and prepare them in the fridge for several days.

Here are some easy ways to incorporate the Mediterranean diet into your life:

What Foods Are Suggested?

Any other type of fresh plant food is welcome, even if it isn’t native to the Mediterranean region.

A Weekly Menu Suggestion For The Mediterranean Diet

A seven-day menu created by a dietitian from a well-known fitness institute in Italy is provided below. The daily caloric intake is estimated to be around 2000 kcal. It can be used as a model and adjusted accordingly, or it can be followed exactly as is, with the addition of flavors such as herbs, citrus fruits, spices, mustard, vinegar, and so on. It’s a diet that combines physical exercise with the goal of maintaining a steady weight. If your prior eating habits were drastically different, the approximately 2000 calories per day in this menu will be a positive step toward a healthy weight loss.

According to some research, adopting a Mediterranean diet of roughly 2000 kcal for a year can result in a weight loss of 10 kg. Reducing the amount of fruit on the menu given is a good option for a slightly faster weight loss result. Use vegetables instead of fruits in snacks, for example. This lowers the overall calorie intake. According to experts’ calculations, a diet of roughly 1200-1500 kcal per day can result in a weight loss of about 5 kg in a month.

1 banana and 10 roasted hazelnuts as a snack

1 cucumber and 1 cauliflower as a snack,

fresh fruit and 5 almonds for a snack