Industry reports out this week reveal that sales of Ford cars and trucks have plummeted in China. Gildshire wanted to learn more. The 247 Wall Street website helped with the research. 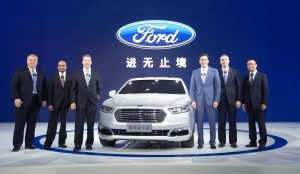 Happier days when Ford first introduced the Taurus to China.

These numbers contrast sharply with reports on GM’s progression into China. General Motors and its joint ventures delivered 858,344 vehicles in China in the second quarter of 2018. Sales grew 0.7 percent from a year earlier. Despite the worldwide softening of the passenger vehicle market, the Cadillac and Baojun (China’s rebadged, but General Motors’ produced, cars) brands achieved record deliveries for the second quarter, all while Chevrolet continued to post double-digit growth in sales to China.

In the first half of this year, GM deliveries in China grew 4.4 percent on an annual basis to 1,844,396 units. In the second half, the company is adding 10 new and refreshed models, two-thirds of the total for the entire year.

This news is particularly vexing to Ford as they have been busily trying to rebrand themselves with a new emphasis on trucks and crossover vehicles which, they say, the consumers want to buy to the exclusion of cars. The company had hoped to score big numbers in China to show domestic car buyers and company shareholders that the recent decisions Ford has made are merited.

These results throw a wrench into Ford’s claims of being the industry leader, which is an important factor in gathering investment for new tech. CEO Jim Hackett has tried to sell the company’s future as a leader in electric and autonomous vehicles, but there is powerful competition. Other global manufacturers want to lead in this area and tech-centric companies like Alphabet are forging ahead, as well. Alphabet’s autonomous vehicle unit Waymo has almost a decade worth of head start on Ford. Its cars have posted over 7 million “self-driven” miles. Ford’s initiative cannot approach that, and the company has similar challenges in the electric vehicle market, which is led by Tesla.

Before Ford can convince anyone it has solid footing in the future, it must make the case for current success. Based on its Chinese results, that is not possible.

Sadly, the Nissan Juke is Set to Disappear