Home » Our World » Ford to be Sued Over Emissions Test Results

The folks at Volkswagen headquarters in Wolfsburg, Germany may just be rubbing their hands together right now. However, they may hope the recent news about Ford doesn’t remind folks about VW’s recent undoing. It seems that Ford Motor Company is about to deal with a class action lawsuit. What is claimed? That the filth coming out of the tailpipe of as many as a half million Ford pickups exceed what they emitted in government tests. If you, like Gildshire, are saying, “That sounds like the kind of nonsense Volkswagen pulled,” then you would be correct. So far, the claims only reach into Ford trucks, but no one knows if it stops there or advances to cars and vans. Bloomberg broke the story, but this is what we know, so far. 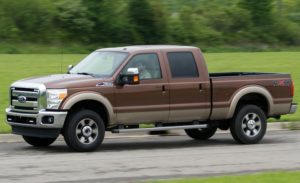 The suit particulars include the diesel F-350 and F-250 Super Duty pickups. They sold between 2011 and 2017. The claim states that real-world nitrogen-oxide emissions were as much as 50 times the legal limit. What official grade did the trucks receive in their emissions tests? Passing, all the way around.

“The vehicle’s onboard diagnostic software indicates emission control system to be operating as Ford intended, even though its real-world performance grossly exceeds the standard,” attorney Steve Berman, a managing partner at Hagens Berman, the firm that filed the suit, said in the complaint.

When asked for comment, Ford’s spokesperson replied with the company’s official statement: “All Ford vehicles, including those with diesel engines, comply with all U.S. EPA and CARB emissions regulations. Ford vehicles do not have defeat devices. We will defend ourselves against these baseless claims.”

In terms of the company’s current plans, this lawsuit could not have come to bear at a worse time. Just days ago, they announced plans to put a new diesel powerplant in the Ford F-150. Fuel economy? Achieving or beating the stated target of 30 mpg highway would be great for Ford’s publicity. But it’s also possible that this lawsuit and potential government interference could complicate that plan.

It is said that the cheaters will always run a step ahead of the testers. We have seen it in the world of athletes and steroids. However, only recently has this sort of thing been rampant in the automotive retail world. (Now, don’t remind us about NASCAR cheats.) Volkswagen,  FCA-Chrysler, and now alleged Ford indiscretions. The new normal? We hope not, but…