Home » Our World » Ford Vehicles to Communicate With Outside World

Drive down any highway in America and see the Ford vehicles sharing the road with you. However, have you ever heard one talk? Probably not, or at least so far as you will admit. Well, the company wants to change all of that. According to Motor Trend, future Ford vehicles may be veritable chatterboxes, nattering on about all kinds of things. Gildshire loves this kind of thing, so we set out to discover more.

At the recent Consumer Electronics Show, Ford announced some serious news. It will establish an open, cloud-based platform allowing different a city’s transportation system to move people more efficiently. With efficiency, or so Ford believes, comes safety. The platform will share real-time data between a variety of transportation methods and the people associated with them. These would include personal vehicles, pedestrians, bicycles, mass transit, traffic lights, and parking locations.

Real-time communication enabled by this platform will improve traffic flow across many mediums, reducing congestion in cities. Moreover and crucially, app developers and companies could conceivably access the platform’s capabilities to create new services to help customers get around more easily. Think of it the Waze program, except on steroids. 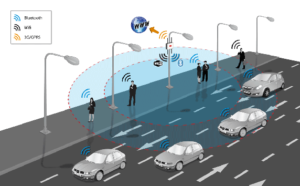 Just think of the possibilities, because they are endless!  The program can make sure autonomous cabs, Ubers, and Lyfts aren’t driving without passengers during rush hour traffic.  The interface can establish safe and secure pick-up and drop-off zones for these vehicles. Lyft is onboard. They are currently testing a platform that will someday help deploy autonomous cars to different areas of the city based on demand. This could be a crucial part of Ford’s goal to offer autonomous ride-hailing vehicles by 2021.

The communication with pedestrians is two-way, rather than just from the car to the person. Walkers and runners can send signals to cars via their mobile phones, helping others to detect their presence. In the future, stoplights will warn vehicles of a potential accident or dangerous situation. That will prevent a small problem from becoming an enormous problem. Potentially, the tech can help curb pollution by allowing cities to set specific regions where vehicles must drive in fully electric mode. Other applications include identity management, payment processing, and location-based services.

While Ford vehicles will initially be the testers, and beneficiaries, of the new program, widespread use is almost inevitable. The genie never goes back in the bottle. If she does, there is a communication system in the future to get her back in there safely.

Has Jack the Ripper Been Identified?