The pickup wars are neverending. No longer a “stuff hauler” to be put aside when the family went to the movies, the pickup has come into its own in the last ten years. Once consumers determined that a pickup truck was an acceptable mode of main transportation, the wars were on. Now, each and every year the stakes go higher. More horsepower, added torque, increased payload, up, up, and up. The last few years have even included a nod to gas mileage (though “truck guys” are loath to talk about such unmanly things.) The results of the wars have been a better product than what was available before. Now, one company has taken its best shot, at least for now. Ford’s new F-150 is out for sale, and it is getting rave reviews. Gildshire, your favorite automotive news magazine, wanted to see what the fuss was all about. 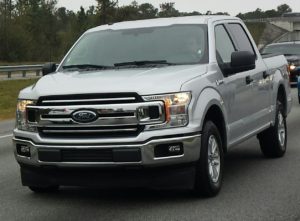 Somewhat surprisingly, Kelley Blue Book is one of the leading applauders for Ford’s new F-150. The usually staid KBB is known for stern analysis over cheerleading. That hasn’t been the case this time. The folks at Kelley are in love. They cite the higher towing capacity of 14,200 pounds, which is available if you choose 2-wheel drive without the Crew Cab. The Crew cab knocks about 1,000 pounds off the capacity, but folks towing over 13,000 pounds regularly are better off with a 3/4 ton truck, rather than this 1/2 ton rig.

Interior styling is a thing in this new era of truck ownership. After all, if the family is along for the ride some creature comforts are a necessity. Ford’s new F-150 is out front in that category, as well. The interiors can be as practical or as plush as you like. Limited Interior features include heated front and rear seats. Oldschool truck owners would scoff at massaging truck seats, but this ride has those, as well. Sound options include Sync 3, Bang & Olufsen Play or Sony audio systems.

Your favorite automotive news magazine shakes its corporate head over the newfound mainstream “car-ifying” of the pickup. Bob Dylan said it best. Times, they are a’changin. True for pickups, that’s for sure.