Home » Our World » Gary Cohn’s Departure: How is Business Reacting?

This week, in response to President Trump’s intention to impose a tariff on steel and aluminum imports, economic advisor Gary Cohn resigned. While the current White House has been a veritable revolving door of aides and advisors in and out, this one was different. The business community was quiet when Sarah Huckabee Sanders took over for Sean Spicer as press secretary. It was somnolent when Dina Powell left as deputy national security advisor. However, Mr. Cohn’s exit sent the stock market into a frenzy. Was he the reason for the turmoil? Or, is something else afoot? Today, Gildshire looks at what is happening and connects the dots with the economy. 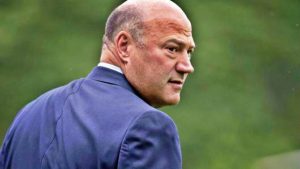 Though the Dow Jones Industrial Average isn’t the be-all and end-all of the economy (after all, the DOW is gamed to go up, per Adam Conover) stock watchers still pay attention to the DJIA. It provides a snapshot of the overall health of the American economy. Imagine the stock watchers’ dismay, then, when the Dow tumbled 300 points upon news of Cohn’s departure.  Investors read the resignation as a signal that the President will carry out his vow to impose a 25% tariff on imported steel and a 10% tariff on aluminum. Wall Street investment pros fear the tariffs are the first shot in a damaging trade war.

“It signals that the Trump administration is absolutely going to move forward with tariffs and the risk of a trade war is now more elevated,” said Chris Zaccarelli, chief investment officer at Independent Advisor Alliance.
Investor angst over Gary Cohn’s departure goes deeper than the tariffs alone. He was the mastermind behind the Trump tax cuts that meant such a windfall to Big Money. As such, Cohn resided in the President’s inner circle. At least, until he didn’t. While in Washington, Gary Cohn served as a counter-balance to the President’s protectionist instincts. Free trade is catnip to Wall Street. Tariffs, and their retaliatory measures) wring sweat out of the foreheads of investment pros. Already this week, Trump’s tariff plan led to a backlash from top US trading partners, including the E.U. and Canada. Already nervous over the President’s avowed intention to tear the heart out of NAFTA, Canada and Mexico are on high alert. The tariff is one more sign that this President intends to plow full-on into whatever trade conflict he deems important to his agenda.
Some investment groups, though, sound a warning bell against panic. They say Cohn’s departure shouldn’t create widespread unrest. On average, leaders at the National Economic Council (Cohn’s post) only stay two years. While the position has held power under some leadership, it hasn’t always been a seat of strength. One more thing we need to remember. Those who tell us to relax, do so for one reason. President Trump’s circle of trusted advisors tend to be himself, family, and Fox News. None of those included Gary Cohn.
The tariff (if it takes place) will be the beginning of an economic conflict with the Far East. Cohn, the former head honcho at Goldman Sachs, is an unlikely individual to champion a trade imbroglio with China. He understands global economic linkages more than most in this Administration.
What is the takeaway? A White House cocktail party that includes everyone who is a voice of moderation and reason has one fewer attendee now that Gary Cohn is gone. Indeed, the room rings with emptiness. The question that has everyone concerned now? What truly bad things did Cohn prevent while in the Trump administration? Is the economic roller-coaster that is the current daily DJIA an overreaction, a harbinger, or somewhere in the middle? As important, who is the next head of the NEC? Even if the president makes a great choice, the next NEC director may not be around for long. That two-year number includes the tenure of advisors in a less-chaotic regime than this one. And, that’s an understatement.
Whatever the future brings, Gildshire will stay on top of it. China may soon be in conflict with us, but their axiom remains. “May you live in interesting times.” Bette Davis said it best. “Buckle your seatbelts. It’s going to be a bumpy flight.” Never truer than now. Stay with us.
#Business#Economy