This has been a dreadful week for the United States of America. But, maybe this was the week we needed to have. A YouTube video of fewer than nine minutes showed us all a sight we will never forget. And two names we will remember always. Or we should. Minneapolis Police Department Officer Derek Chauvin and George Floyd’s names should be linked because Chauvin choked Floyd to death in eight minutes and 46 seconds. While George cried out that he couldn’t breathe, Chauvin casually placed his left hand in his pocket, perhaps so he could look like the baddest cop on the force. When George cried out for his late mother, Chauvin surveyed the late-spring Minneapolis sidewalk, perhaps to see girls. It didn’t take long for George Floyd’s death to take place. A well-placed knee in the neck will do the job efficiently. 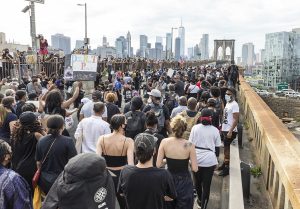 Actually, we will probably never know Chauvin’s thoughts during those fateful minutes. His attorney will write out pretty words that are designed to move a jury. Chauvin will say them. In a just world, Derek Chauvin will have his day in court and never be heard from again.

Meanwhile, the death of George Floyd has mobilized people and amplified voices in this country and others. The hashtag #blacklivesmatter has appeared on social media accounts from Salinas to Timbuktu and beyond. Hashtags are easy, but marches are hard. But, not so hard that thousands of people from Seattle to London to Paris to Prague haven’t coalesced into a marching, shouting wave of emotion.

But photos of these marches look different from grainy violence-marred footage from fifty years ago. The people in the streets who are reacting to George Floyd’s death and calling for change are marching in peace, and singing songs of a United States the way she should be, rather than the way she is today. 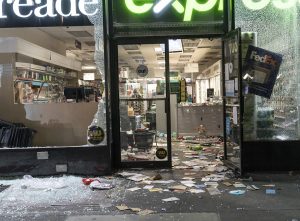 Are there some bad actors taking advantage of the turmoil?

Sure, there are. Do the bad actors throw things and loot, often small, and minority-owned businesses. Sadly, yes. Do the actions of the bad actors blur the message of the march? We have to say yes.

But, an overwhelming number of marchers are peacefully coming together in remembrance of George Floyd and calling for changes in the way our cities are policed. They are bringing to light the fear people of color have when they are on the streets of their own neighborhood after dark, especially if they are alone.

Perhaps most importantly, the hundreds of thousands of people around the world are heeding the calls of the Floyd family, who inserted calls for peace into the eulogies of their loved one.

But each of those steps forward in human history was gained with the blood of combatants and innocents alike.

Perhaps we stand now at the precipice of change. An innocent man, George Floyd, shed blood on that Minneapolis street. His loss is tragic and unfair to the point that we rage into the night. Our voices crack in grief and shame for a country that has lost its way. Or perhaps never found its way when it came to policing.

But many voices are calling for us to acknowledge where we went wrong, and make it right, going forward. And so, we should.

Gildshire will admit a wrong and do it now. At the top of this article, I said George Floyd would always be linked with the bad cop who killed him. That can’t be true. George Floyd will be remembered for his status as a martyr to change. The man who killed him will soon be known as a number in the chow line in the Minnesota prison system.

Rest in Peace, George Floyd. You can breathe now in the arms of your Mama. #blacklivesmatter

Why the Nebulizing Diffuser is the Future of Aromatherapy