written by Emmaline Soken-Huberty May 9, 2021

People cringe at the thought! However, edible insects are commonplace in Mexico and several Asian countries and have been making waves in the United States in the past decade. The Black Ant in New York, which opened in 2014, is trying to change how Americans see insects. The chef, who cooked grasshoppers as a child with his grandmother, makes meals like Black Ant Guacamole, cocktails with ant salt rims, and grasshoppers, which are boiled in water, toasted with spices, and sun-dried. France, a country that is very particular about food, is also experimenting with insects.

If you see a grasshopper outside, don’t just pick it up and eat it. Those bugs are full of toxins and pesticides from their life in an urban setting. Insects for restaurants often come from a farm, where they’re specifically raised for food, or the wild, where they are less polluted from human activities. The Black Ant chef goes to Mexico to get ants when they come out of their nests during the rainy season and plans on starting his own grasshopper farm. 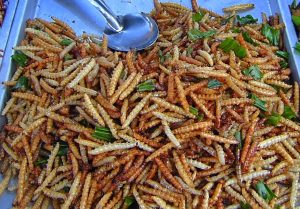 But, why eat bugs?

The main reason is that insects are more sustainable than other forms of protein, like cattle or fish. They require very little care to cultivate and are full of nutrients. The United Nations (the Food and Agricultural Organization branch) supports insects as an environmentally-friendly food source. They are also cheap to propagate, which is probably one of the reasons that eating insects are more common in lower-income countries, as opposed to the US.

Edible bugs include carpenter ants, honeypot ants, lemon ants, agave worms, cicadas, mealworms, and more. There are so many ways you can eat these bugs. For example, eating crispy grasshoppers like bacon bits, fried worms in tacos, or ground-up crickets to make flour. If you want to try preparing and consuming bugs, there are websites, like San Diego Wax Worms and Fluker Farms. For premade, sweet treats, Hotfix sells all kinds of lollipops with insects inside, candied ants, and potato-chip flavored crickets.

Why We Need Heroes?

How to Know if Someone is Lying to...

You are not Motivated – How to Get...

You Have More Control of Your Emotions than...