Is there a Holiday on the calendar more tied to numbers than Christmas. Indeed, Christmas numbers are as much a part of the season as snowmen and Lexus December to Remember. How many reindeer haul Santa through the sky and into your home? Eight, of course. How many calling birds are in the song? Four, but that was an easy one. How many Lords leap? Ten, silliness. I hope they don’t land on eleven ladies dancing. That would call for at least 13 doctors prescribing. Today, Gildshire Magazines presents our version of Christmas Numbers. 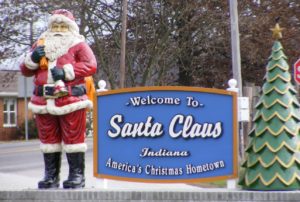 Our Christmas numbers include two of these. This one in Indiana.

2: Number of U.S. towns named “Santa Claus”. Both Georgia and Indiana have one.

3: The number of states that produce more than a million Christmas trees a year. Most to least? Oregon, North Carolina, and Michigan.

9. The month number (September) in which Jesus was likely born. It almost certainly wasn’t December, as shepherds wouldn’t have been watching their flocks outside during cold winter weather.

10: The number of years a Christmas tree grows prior to harvest.

19: Mel Torme’s age when he wrote “The Christmas Song” (“Chestnuts roasting on an open fire” etc.) He composed the song in 34 minutes. Good grief!

20: The height, in feet, of the first Christmas tree erected at New York’s Rockefeller Center. Construction workers put it up in 1931 on their own initiative. Four years later, the Rock Center tree became an official recognition of the beginning of the season.

35: The percentage of diamonds sold in December (more than at Valentine’s Day).

When I play “Rock, Paper, Scissors,” these are the rocks I like best.

40: The percentage of Americans who begin Christmas shopping before Halloween. (Such efficiency makes Gildshire a little nauseous.)

51: The average number of dollars spent each year on Christmas decorations.

62:  The percentage of Americans who will buy at least one gift online in 2017. (Frankly, I thought the number would be higher.) 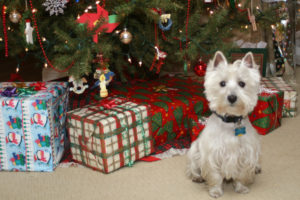 “These are mine, but where are yours?”

71: The percentage of dog owners who will buy their pet a Christmas present. (This number is higher in Abilene Texas, where dog gifts make up a large portion of the city’s retail output.)

75: The percentage of Christmas shoppers who intend to buy at least one gift card as a gift. (Apparently, that cheese wheel last year didn’t go over as well as you thought.)

96: The height, in feet, of this year’s Rockefeller Center Christmas tree. It is the widest ever and the second tallest exceeded only by the 100-foot tall tree erected in 1999.

104: The average price in dollars of a partridge in an aviary store. However, pear trees are sold separately, and you’ll need to make two separate trips since partridges don’t wait in the car well. 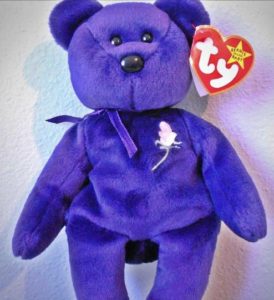 412: The price (USD) of a “Princess” Beanie Baby sold over the 1997 holidays in England to honor the memory of Princess Diana.

1836: The year Christmas was first made a state Holiday in the U.S. Alabama was the first state to recognize it as such.

1939: The year Rudolph the Red-Nosed Reindeer was “born.” He was written by Robert May, for placement in an ad circular by Montgomery Ward.

167,000: The number of miles candy canes sold worldwide would stretch if they were laid end to end. (This number brought to you as a cautionary tale by the American Dental Association, reminding you to brush.) 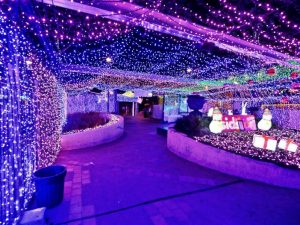 15,800,000,000: The total pounds of mail delivered by the United States Postal Service between Thanksgiving Day and Christmas Eve. Let’s all take a moment and raise a glass to the mail carrier in your neighborhood, saying “Well done, ladies and gentlemen!”

Down The Stretch They Come! NFL Playoff Push