Gildshire Goes to the Movies: August 24-26

Hello once again, movie fans. Your good friends at Gildshire Goes to the Movies is back once again for our bi-weekly helping of fun, nonsense, and movie talk. Based on the maps we have seen (and the air we have breathed) the entire west coast is on fire, and not in a good way. We talked to your doctor and he suggested that you see a minimum of five movies in filtered air-conditioned comfort. He also suggested a box of Hot Tamale candies and a Coke Icee. At least I think he was your doctor. With suggestions like those, he may have been your dentist. Anyway, if five movies it is to be, allow us to guide you in the proper direction. Rotten Tomatoes has four movies up for grabs this week. Let’s see what they like, and mock them if they’re wrong. 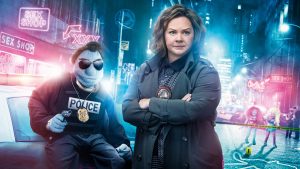 The Happytime Murders. Rated R for strong crude and sexual content and language throughout, and some drug material. Melissa McCarthy is comedy gold, but the movies she chooses leave something to be desired. One McCarthy flick after another hovers around the 50 Tomatoes line. She can do better, and we believe she will do better. But, this Muppet mess isn’t better. It costars Maya Rudolph, Joel McHale, and Elizabeth Banks. Rotten Tomatoes 27, Gildshire 2.9. 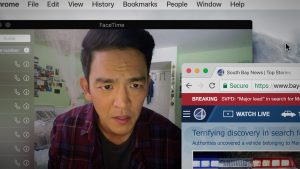 Searching, rated PG-13 for thematic content, some drug, and sexual references, and for language. I’m not sure why the police even bother to look for physical evidence anymore. The answer to the mysteries of the teenage world is on their laptop. At least that’s what the movies have taught me over the last few years. This movie is conceived and executed better than most and is getting positive buzz as a result. The cast is strong, as well. It stars John Cho, Debra Messing, Joseph Li, and Michelle La. Rotten Tomatoes 89, Gildshire 4.0 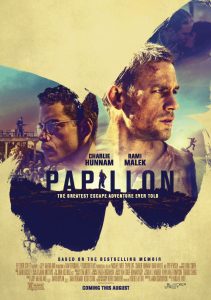 Papillon. Rated R for violence including bloody images, language, nudity, and some sexual material. For those too young to remember, Steve McQueen was THE MAN in the 60s and early 70s. From careening through the streets of San Francisco in his 1968 Ford Mustang 390 GT 2+2 Fastback in “Bullitt,” to forming the plan for “The Great Escape,” Mr. McQueen was all that before all that was fully invented. He made a great movie called “Papillon.” Released this weekend is a good movie named “Papillon.” Is it worth seeing? Sure, as long as you are too young to remember Steve McQueen or can forget his movie for a little more than two hours. The new one stars Charlie Hunnam, Rami Malek, Tommy Flanagan, and Eve Hewson. Rotten Tomatoes 56, Gildshire 3.8. 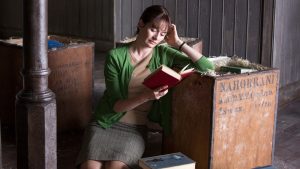 The Bookshop. Rated PG for some thematic elements, language, and brief smoking. Some movies betray their quality in their well-chosen cast. Some movies betray their quality in the script. But, then there are the movies that betray their quality in their theme music. So it is with the winner of Gildshire’s Movie of the Fortnight Award. The bouncy violin music portends pluck, goodwill, and a winner in Emily Mortimer, the film’s star. The rest of the cast, consisting mostly of Patricia Clarkson, Bill Nighy, James Lance, and Honor Kneafsea, complete a wholly delicious film about a subject about which the best people care deeply. Namely, books and the stores that continue to sell them. Rotten Tomatoes 62, Gildshire 4.3.

That’s it for this week. Enjoy the clean air inside the cinema and the company of someone who loves the movies as much as you do. For that is the essence of an afternoon at the show. Or, go see “The Bookshop” all by yourself, because playing hooky from work for an afternoon is a delicious pleasure that everyone should enjoy once in a while. We will see you in two weeks for the opening of the autumn movie season. We can’t wait!

Until then, Ciao for now. We don’t mean to rush off, but our box of Hot Tamales seems to be empty. How did that happen?

Why Is Everyone Talking About Kratom?

2018 US Open Qualifying Round Action and Food Village Favorites