New York City native Penny Marshall, Laverne to Cindy Williams’ Shirley, before before taking the director’s chair for several hit movies,” died at 75 Monday, Dec. 17. She passed peacefully in her home in the Hollywood Hills.

Ms. Marshall battled diabetes for many years. Complications from the disease were the cause of death.

Marshall’s professional triumphs of the directorial type made her a trailblazer in the field. Before her, men directed movies, period! She became the first female movie director to nail $100 million gross when she helmed “Big” back in 1988. In 1992, “A League of Their Own,” also topped the $100 million mark.

Penny Marshall’s path to success started in the Bronx’s Grand Concourse where her mother warmed clothing on the apartment radiator when the winter chill made them hard to put on. Nevertheless, there was show business in the family. Penny’s mother (Marjorie) taught tap, and little Penny started taking lessons from Mom when she was only three years old. Dad was director/producer Tony Marshall who Americanized his family’s name from its native Marsciarelli.

Penny wanted to act, but her looks were far from classic. That and her thick Bronx accent made casting the talented young lady a challenge. That is until Laverne danced down the street to a ditty Penny herself helped to invent. 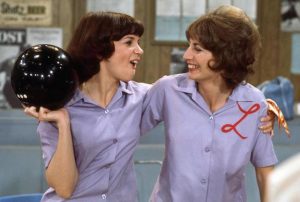 Cindy Williams and Penny Marshall in Laverne and Shirley.

Some people don’t remember that Laverne and Shirley was actually a spin-off. Penny  and Cindy Williams became Laverne DeFazio and Shirley Feeney respectively on “Happy Days.” Wisecracking their way into the viewers’ hearts, the supposed employees of the fictional “Shotz Brewery” in “Happy Days” locale Milwaukee, proved so popular a spinoff was inevitable. Laverne and Shirley became the acting pinnacle of Penny Marshall’s career, but it came at the end of a mighty struggle for the aspiring actress. She scrambled and pleaded for commercial work until the role of nasal speaking secretary Myrna Turner was added to “The Odd Couple.” That break, in 1971, was followed by two appearances on the Monday night CBS hit “The Mary Tyler Moore Show.”

Laverne and Shirley was a ratings-grabber from the first episode, running for eight seasons before cancellation. Afterward, the unemployed Penny Marshall found herself typecast as Laverne. Good roles, particularly in the dramas she would have liked to pursue, were hard to land. So, the enterprising and talented Penny Marshall stepped behind the camera. It may have been an unlikely move, but it became a second act arguably far more successful than even her acclaimed first act.

Hanks starred in Marshall’s “A League of Their Own,” as well.

In 1971 Ms. Marshall married actor/director Rob Reiner. The union lasted ten years. Interestingly enough, Penny auditioned for “Gloria” on “All In the Family.” The role beside Rob Reiner’s “Rob Stivic” went to Sally Struthers, instead. 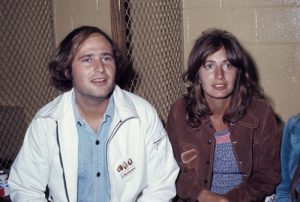 Rob Reiner and Penny Marshall during their time together..

During her leisure time, the native of New York never strayed far from The Big Apple in her sports preferences. She was a die-hard New York Knicks fan, attending many a game at Madison Square Garden. She was also a devoted collector of sports memorabilia.

Penny Marshall gave birth to a daughter (Tracy) after a romance with a University of New Mexico football player. That union was to lead to a divorce, as well. Penny also dated performer Art Garfunkel for about five years.

“I led an oddly charmed life for someone who thought she was not a charming person,” Marshall once observed.

Marshall was a cancer survivor, defeating the disease after it had taken hold of her brain and her lung. Her older sister Ronny, her daughter and three grandchildren, Spencer, Bella, and Viva, survive her.

Penny Marshall: a favorite of Gildshire’s and many more besides. Rest in Peace.