“If your name isn’t in the obits, eat breakfast.” Those words from Carl Reiner exemplified his take on life as well as any others. The master (some would say founder) of observational comedy did not break his fast this morning, because his name was in the obits. Today, Gildshire remembers Carl Reiner, gone at the age of 98. Pictured above with his son, Rob.

The Beginning of a Legend

Though first trained to be a serious actor, Carl Reiner found his comic voice during his three-and-a-half-year stint in the Army. That’s where characters such as Monty, the talking dog who impersonated celebrities, left troops in the South Pacific in stitches. Just one year out of the service, Reiner landed the lead role in the Broadway production of Call Me Mister. That role led to a writing gig for the legendary Sid Caesar in “Your Show of Shows.” Did Carl Reiner consider it a step down to go from leading man to a member of the writing staff? Later, Reiner said:

“I thought this guy was an extraordinary talent. Being a second banana to such a massive first banana was not a comedown at all for me. I realized I was working with the best.”

While the other writers in the room considered the upstart Reiner a novice in the field, it did not take him long to own the writing room. That was no small feat since it was filled with some of the best comics of the generation. The genius roster in the writing room for “Your Show of Shows” included Mel Brooks, later Reiner’s lifelong writing partner. Other writers of note on Caesar’s show included Steve Martin, Neal Simon, and Woody Allen.

One day, Reiner was watching the news. He became incensed watching a guy pretend to witness something he clearly did not. Reiner turned to Brooks and said, “Here is a man who was actually at the scene of the Crucifixion 2,000 years ago.” Brooks responded—doing an old Jewish guy who knew Jesus, “Yes, yes… Thin lad, wore sandals.”

Soon, they realized they had stumbled on to The 2000 Year Old Man, the most inventive and elastic improvisational bit ever known. For ten years, Reiner and Brooks performed the act at dinner parties. Finally, Steve Allen convinced them to get it on vinyl before a comedian stole it from them. 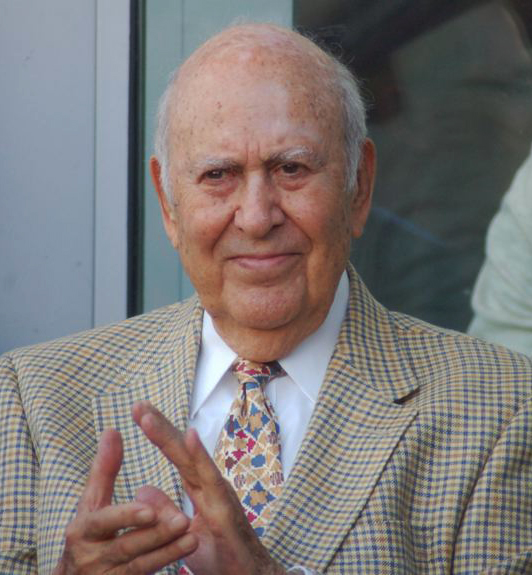 In 1959, Reiner published Enter Laughing, a semi-autobiographical novel about his early career in show business. Later, he used what he had learned as a comedy writer when he wrote thirteen scripts for Head of the Family. That show had Reiner starring as a writer on a comedy revue show. When that failed, TV producer Sheldon Leonard convinced Reiner to take another run at the project. But this time with Dick Van Dyke and Mary Tyler Moore in the lead roles. The Dick Van Dyke Show was a huge success for CBS. The show garnered fifteen Emmys and set the comedy blueprint for television comedy for decades.

As a film director, Reiner was everywhere!

His work could be personal, such as the screen adaptation of, “Enter Laughing” in 1967, as well as the overlooked musical “Bert Rigby, You’re a Fool in 1989.” (“It was one of the best things that I did in my life, and nobody ever saw it,” he later told NPR.) But, he could also be broad and comically absurd. This side of Carl Reiner was best exemplified by a four year run with Steve Martin that included The Jerk, in 1979, Dead Men Don’t Wear Plaid in 1982, The Man With Two Brains in 1983, and All of Me in 1984.

The morning after his death, tributes to Carl Reiner ran all across social media. In one of these posts, someone said their heart was broken. Gildshire looks at it differently. We are so appreciative of the blessing it has been to live in the era of this man. Decades later we remember the belly laughs his work inspired. That is why Gildshire Remembers Carl Reiner: A Comedy Icon.

Fashion and Beauty Trends Changing in the Post-Pandemic...