Hello again sports fans, the Gildshire Sports Spotlight: Christmas Weekend is coming at you with a load of attitude, some opinions and a lot of fun. We love sports as much as we love the long weekend to watch the games people play! (And that’s just in the mall on Christmas Eve.) In the Gildshire Sports Spotlight: Christmas Weekend we will touch on the NFL games that matter coming down the stretch. We will also talk about the big NBA quintuple-header (that’s five, right?) Christmas Day. So grab your nearest Number One foam finger and let’s get started!

Week 16 in the NFL is fraught with import, as 14 of the 16 games have playoff implications for at least one of the teams. That said, there are important games, and then there are IMPORTANT games as we barrel down the home stretch of the regular season. We highlight the biggest and the best. All times eastern. (Spoiled brats back east.) 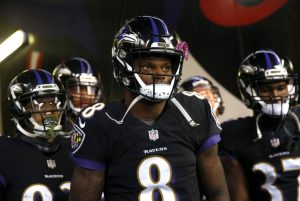 The late Keith Jackson said it best when he said, “WHOA, NELLIE! There was a time when the National Football league stashed meaningless games in the late-season Saturday slots. Not so here, as both the Never-mores and the Bolts have big time reasons to want to win. San Diego may be the second-best team in the AFC. Heck, after they beat Kansas City by a point in K.C. last Thursday, the Chargers may be the best team in the conference. That said, the Chiefs have the tie-breaker, and L.A. is stuck in a Wild Card slot, even with their gaudy 11-3 record.

The Ravens have turned straw into gold in the second half of the campaign. Left on life support a month ago, Baltimore brought in quarterback Lamar Jackson to replace an ineffective Joe Flacco, and things have changed for the better. This is the best defense Jackson has seen, though, and it remains to be seen whether he has the right stuff overall, or just the right stuff against bottom-feeding defensive units. Los Angeles is a 4.5 point favorite. We’ll give the points and make Lamar Jackson prove it to us. NFL Network has the call. 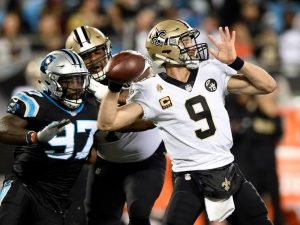 Thirty-nine year old Drew Brees is getting it done in The Big Easy.

The Steelers lead the AFC North, but that lead is razor-thin due to Baltimore’s resurgence. Being cast in the role of Team Turmoil hasn’t helped Pittsburgh, either. The season-long drama between the team and All-Pro running back Le’Veon Bell came roaring back when Bell’s backup, James Conner, got hurt. An up and down season makes this matchup huge for the Steelers.

The Saints got by the Carolina Panthers last week in squeaker fashion, but the win was enough to keep the Saints in line for the Number One overall seed in the NFC. That is more important to this team than it has ever been for any team in the history of team sports because they aren’t the same team outside as they are in their comfortable, climate-controlled dome. With home-field advantage throughout, New Orleans can go through the playoffs without ever having to set foot outside. That is, as long as they hold off the Rams for the top seed. They can clinch that honor with a win over Pittsburgh this weekend. The Saints are a 5.5 point favorite. Pittsburgh is good, but we aren’t betting against New Orleans at home, no, no, never, never, uh-uh, uh-uh. CBS has the call. 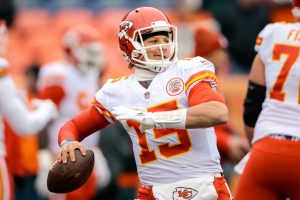 Second-year QB Patrick Mahomes heads to Seattle to battle the weather, the Hawks and the 12th Man.

A month ago, Patrick Mahomes and the Kansas City Chiefs were the odds-on favorites for MVP and top seed out of the AFC, respectively. While neither of them has fallen clear out of the picture, odds-on is no longer the shoo-in it once was. The Chiefs are being hounded by the Chargers, and even the Texans have poked their ten-gallon hats into the picture. Mahomes, while still exciting, has thrown some picks over his last few games. That makes this game in Seattle an important one.

As for Seattle, their comfort zone shrank a bit when they unexpectedly lost to San Francisco last week. The Hawks are still the five-seed, and will likely remain there, but another loss could shake the playoff tree to the point that the Hawks could fall out of it. Look for Seattle’s famed 12th Man to try to shake young Mr. Mahomes. Kansas City is a 2.5 point favorite. Call it a lean on the Chiefs, giving the points. NBC has the call.

NBA Quintuple-Header in order of our level of interest:

Giannis Antetokounmpo is worth the price of admission, but he’s really the only show-stopper this game has to offer.

The Western Conference is about three teams. Beyond the Warriors, Rockets, and Lakers, the Gildshire Sports Spotlight: Christmas Weekend can’t see a compelling reason to watch two teams who play good ball, but are not close to the top.

The Rockets are finding their way, but the Gildshire Sports Spotlight: Christmas Weekend has wearied of Russell Westbrook and the Oklahoma City Thunder.

The Eastern Conference is a bit more interesting than the Western Conference because the last 3-4 standing isn’t already determined. The young Philadelphians are on an uptick, while the Celtics have their foot on the gas, winning eight of their last ten. 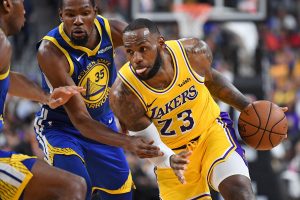 The Warriors are the gold standard, and LeBron James is the King. How can this not be the most-compelling Christmas Day matchup, and the one the Gildshire Sports Spotlight: Christmas Weekend edition will take the time to watch?

There are no bowl games between ranked teams this week, but all of that changes next week. Be sure to come back for that. Until then, enjoy the games. If there is a gift that doesn’t have a “From,” it was us, your friends who put out the Gildshire Sports Spotlight: Christmas Weekend.

The Best Christmas Markets in the World