Hello again sports fans and welcome to the much-anticipated, often-envied, but never duplicated Gildshire Sports Spotlight: New Year’s Weekend edition of our Sports magazine. Remember to check out Gildshire’s full line of magazines where we cover everything from healthy living to travel to politics and business. They don’t call us a Mall of Magazines for nothing and the Gildshire Sports Spotlight: New Year’s Weekend is thrilled to be a part of the action. In this edition, we will preview Week 17 in the National Football League, and look at the College Football playoff semis. Next month, as football starts to wind down, expect us to dive into college basketball’s conference season, the NFL playoffs, and much more. 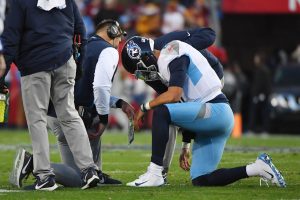 Whatever hopes the Titans have to keep their season alive rests on Marcus Mariota’s health.

The last weekend of the regular season is a mixed bag. There are a few playoff spots up for grabs, but many teams will be resting starters in preparation for the playoffs. In the AFC, though, there is an early playoff game of sorts. Indianapolis travels to Tennessee to play the Titans. The winner makes the playoffs (probably as a Wild Card team, as Houston is expected to trounce Jacksonville.) while the Titans/Colts loser will stay home when the playoff tournament begins. Titans quarterback Marcus Mariota is nursing a neck stinger. His status is uncertain to the point that there isn’t a point-spread. Either way, though, Andrew Luck has never lost to Tennessee, and we expect that streak to continue.

The Pittsburgh Steelers are a perennial playoff team, and it is hard to imagine the post-season with the Steelers participating. As we speak, though, Black and Yellow are on the outside looking in. In Week 17, they’ll need to defeat Cincinnati. Then they must hope the Browns ambush the Ravens to salvage the AFC North crown. We give them a 21% chance of all that going down.

In the NFC, one Wild Card spot remains open. Minnesota owns it and can clinch it with a win over Chicago. If the Vikings falter, Philadelphia could swoop in and make the playoffs with a win against Washington. Gildshire Sports Spotlight: New Year’s Weekend believes Minnesota will take care of business, though Vikings QB Kirk Cousins record in must-win games is not praise-worthy.

Notre Dame and Clemson get the playoffs rolling with a matchup in the Cotton Bowl. The Fighting Irish/Tigers game will be followed by Alabama/Oklahoma. The action gets underway at 3 pm Eastern, Saturday afternoon. ESPN has the call

The odds on the finals being anything but Alabama/Clemson are long. These two teams have been the projected finalists since early October, and it is hard to imagine either Notre Dame or Oklahoma derailing the onrushing trains. However, if you are jonesing for an upset, it might come from Notre Dame. Sure, the Irish strengths match the Clemson strengths, and the Clemson strengths are a little better. But, the Irish don’t have to be the better team. They have to be the team that plays better for four hours. Clemson is a 12.5 point favorite. We like the spread and are staying away from it for wagering purposes, but we lean Notre Dame’s way. 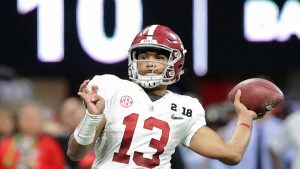 You may not have heard it here first, but you’re hearing it here in the most direct terms. Oklahoma has no shot against Alabama. The Crimson Tide play defense better than most, and Oklahoma never saw a lick of defense during their conference season. Defensive coordinators in the Big 12 Conference (TCU’s excluded, and they gave up more than half a hundred to the Sooners) should be taken out back and shown the business end of a horse whip. Take the Tide, give the points, cash the ticket, and go on with your life. 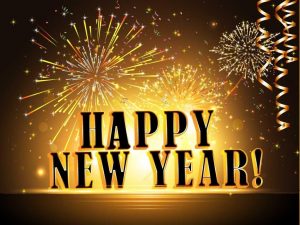 From your friends at Gildshire and the Gildshire Sports Spotlight: New Year’s Eve Weekend crew.