Since no games are going on right now, let’s play one. Gildshire will choose its best players in pro sports history, while you pick yours. Think of it as a “pick to click” with lifetime statistics. The categories will be as follows. Pro football, pro basketball, pro baseball, tennis, and hockey. Don’t look at our answers until you choose your own. Are you ready? Go!

Just like in almost every category that follows, there are several contenders for the crown. The term G.O.A.T., for Greatest of All Time, is thrown around concerning Tom Brady. Others select Joe Montana, based on his incredible postseason success. Undefeated in the Super Bowl (4-0) will do that for you. We think both of those are good choices when it comes to G.O.A.T. at quarterback. But for pure football dominance, we’ll go in a different direction.

The greatest football player of all time played before Tom Brady was even born, and he never took a snap at quarterback. He rushed for 12,312 yards and 106 touchdowns. Oh, and throw in 20 touchdowns a receiver, and one yard shy of 2500 receiving yards as well. Are you not wowed by those numbers. What if I tell you that he did all of that in nine seasons. And that he walked away from the game with his mental faculties intact? The best football player in history is Jim Brown.

Ah, the age-old “stats versus accomplishments” argument. Nowhere is it more profound than in the game of basketball. For years the choice was between Wilt Chamberlain and his gaudy personal statistics, versus Bill Russell and his double handful plus of championship rings. Take your pick. How can you judge?

Fortunately, a player came along to make that moot. He has both stats and rings on his side. While others, such as Kobe Bryant and LeBron James, have come alongside to challenge (and James has a particularly strong challenge case), one factor continues to abide. The best players in pro sports history make their teammates better. No one did that better than the transcendent M.J. His Chicago Bulls team dominated the National Basketball Association during the 90s, and Jordan captured the imaginations of generations of basketball fans. The best basketball player in history is Michael Jordan (pictured above. But you knew that.)

Fourteen decades and hundreds of thousands of players who, at one time or another, earned a paycheck playing baseball. Talk about “How can you choose?” It is actually easier than you think. Babe Ruth hit 714 home runs over his 22-year career. His career batting average was .342, and his career OPS was 1.164.

“But other players have eclipsed all those numbers?”

“The Babe played in a segregated league, missing out on playing against some of the great Negro Leaguers.”

“He never had to travel further west than St. Louis.”

All valid points except for perhaps the last one. Oh, I think I forgot some of his other statistics.

As a pitcher, Babe Ruth was 94-46, had a 2.28 ERA, with four saves. He pitched over 200 innings three times, and more than 300 innings twice. In the World Series, he was 3-0 and sported a 0.88 ERA in 31 innings pitched. It is not a stretch to imagine Babe Ruth inducted to the Hall of Fame as a pitcher. That is if his managers didn’t believe he was more valuable in the everyday lineup. That’s why Babe Ruth is the greatest player ever to play the game. (If I was a jerk, I would finish with “period.” Don’t you hate it when people do that?) 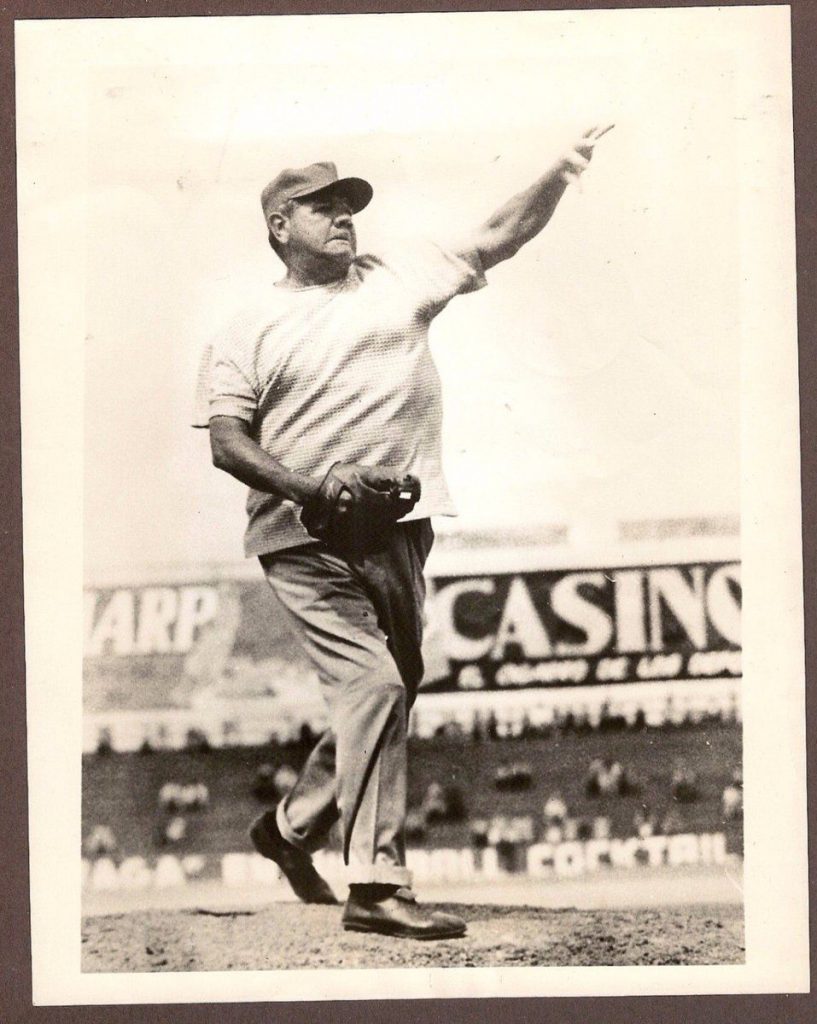 Babe Ruth as a pitcher secures his spot in our list of the greatest players in pro sports history.

A classy roster of tennis pros await us in this category, and the picture is a little murky. The “Open” era didn’t begin until 1968. Until then, the majors were reserved for “amateurs.” So what do we do about Rod Laver, Ken Rosewall, and others? At the end of the day, though, we settled on Roger Federer as the greatest tennis player of all time. His 20 Grand Slam championships speak loudly, and who is to say he couldn’t add more this year, if the Majors are even played?

Federer still competes at the game’s highest level. His 310 weeks (that’s six years, people!) ranked Number One is a record in the open era.

Barring injury, Federer will continue to be a force. His dramatic five-set loss at the hands of Novak Djokovic at last year’s Wimbledon proves that thirty-eight candles on the birthday cake have not deterred his drive and ability. Roger Federer is the best tennis player of all time.

Serena Williams is the best female player of all time. That is becoming more undisputed every day as Serena continues to pile up victory after victory. Serena’s game withstands the tests of both time and competition. Her twenty-three Grand Slam titles over 18 years is remarkable! Out of tennis most of 2017, Serena returned to the top of the rankings with an indomitable drive to achieve Major #24. Will she get there? I would not bet against her. After all, Serena Williams is the best female tennis player ever.

I don’t think a lot needs to be said in this category since one player alone is nicknamed “The Great One.” Wayne Gretzky is not only the best player in hockey history, but he was the easiest one to decide on in this list. Gretzky’s 2,857 points is 900 points ahead of his nearest competitor (Jaromir Jagr), and Gretzky played 246 fewer games than Jagr has, to date. Gretzky has 93 more goals than Gordie Howe, who played 80 games for Hartford when he was 54 years old!

The baffling list of dominant statistics goes on and on, but no one who saw Wayne Gretzky on the ice can ever forget his grace and seeming effortless poise and skill. Wayne Gretzky is the best hockey player in history, and it isn’t close.

Yoga in Quarantine! Are you Doing it Right?