We have asked gently, cajoled convincingly, and done everything we can imagine, short of actual bondage. We have extolled the virtues of Thanksgiving, evoking images of happy families, full tables, and even kittens. Family ties, Grandpa’s stories, Uncle Ben’s jokes. We have invoked the memory of every one of them to convince you to skip Black Friday. Yet, you ignore us like we are the peas on the Thanksgiving table. Well, okay then. If you’re going to hit the sales, let’s make sure you do it right. Gildshire wants you to be productive, successful and out of jail by the time Saturday rolls around. Toward that end, here are our best ideas for how to handle Black Friday at a mall near you.

Watch Out For Fake News: Between now and Friday, Nov. 24, secret “sneak peeks” are going to be discovered on social media. These peeks purport to tell us where to find the hottest deals beginning before dawn Black Friday. SOME of them will be SOMEWHAT true. Know this, though. You’re reading gossip and hearsay. If an ad posts on or after Sunday, Nov. 19, count on its veracity. Before then, potluck and best regards.

Online Shopping Can be Two Birds With One Stone: What is better than shopping in your jammies and getting a jump on the competition by as many as four full days? Nothing, I tell you. Some retailers, including the online retailer to rule them all (rhymes with Whammies Gone) will roll out Black Friday prices the previous weekend.

Furthermore… Selected items, Apple products, for example, are less-expensive online than in those, (admittedly cool as heck) physical stores.

If You Go, Do it Early: We mean early, early early early. Not only beating the madding crowd that stayed in bed until 4 o’clock (sloths), but gaining first access to the most limited items on your list. Also, some retailers are offering incentives to those who queue up early. Stores in the Kroger family, Fred Meyer, for instance, are giving out gift cards to the first 100 people in line. The gift card supply lasts until about midnight. 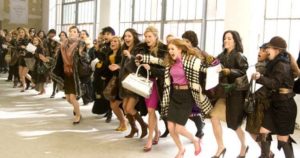 Black Friday at a store near you.

Mama Said There’d Be Days Like This, My Mama Said: Black Friday is one day to shop. There are others. Don’t make the mistake of believing B.F. is the day to complete 100% of your Holiday shopping. For one thing, panic can set in. That’s how people get arrested for assault by Cabbage Patch Doll (that really happened.) For another, some items will be part of a better sale down the road. The best apparel sales often appear on Cyber Monday (Nov. 27), when retailers discount items online. Toys will be cheaper mid-December when Walmart and Amazon go to war with each other. The best deals on name-brand TVs and luxury items can be found in early December, if not early next year.

What if You Want to Return It? Retailers know the frenzy about to be visited upon them as a gift to the bottom line. They also know that desperation makes shoppers inattentive. Some retailers tighten their policies around the holidays. Some give a partial discount (they call it a  “restocking fee”) if you bring an item back. A few won’t let you exchange items sold on that Black Friday at all!  Be sure to ask for each store’s policy, and hold tight to your receipts.

Don’t Fall for the Extended Warranty Sales Pitch: Employees at big box stores receive specific instructions on how to handle the Black Friday customer. Since the profit margin is lower on the initial sale, the store will try to make it up on the seldom-redeemed extended warranty. Let’s do some math. Chances are, your new big screen TV won’t break down in the first two years, and the standard warranty covers you until then. Chances also are, it won’t break down in four years, the second half of which would be covered by the extended warranty. The number of sets that wreck themselves between years 2-4 is infinitesimally small. Save the money you would spend for an extended warranty on salves and ointments for injuries suffered Black Friday.

Lastly, While B.F. May Be Almost the Worst: Waiting until Dec. 23-24 to shop is worse yet. Retailers know they have you by your children’s need for that One Special Thing, and you will pay whatever the sales associate says you will pay. Little Heather’s smile means that much to you.

Good luck, friend. History tells us you will need it.