One of the hardest transitions to a vegetarian or vegan diet is giving up meat. In the United States, especially, we eat a lot of meat. To meet cravings, “faux meat” has become common, and faux versions of everything from bacon to hamburgers are around. Vegans also make their own meat substitutes at home, since store-bought vegan meats are often overly processed. 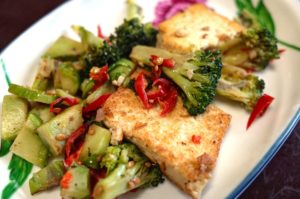 What are the most common meat subs that vegans are using? There are four: tofu, tempeh, seitan, and texture vegetable protein.

Tofu – This ancient food is a staple of Asian cuisine, and is made from soybeans. It is high in both calcium and protein, and because of its natural bland flavor, it can be easily seasoned to mimic pork, beef, chicken, and even seafood. Tofu can be pressed to make it even more appetizing – see this article.

Tempeh – Made from fermented soybeans, this meat sub has a firmer texture than tofu and a nuttier flavor. It’s high in fiber, calcium, and protein. Unlike tofu, it’s easy to slice and serve up quickly.

Seitan – This meat sub has the most ‘meaty’ texture. It’s made from processed wheat gluten, so if you’re gluten-free, this is a no-go. It’s high in protein and can easily imitate chicken, beef, and pork.

Texturized vegetable protein – Abbreviated as TVP, it’s made from dehydrated soy. To serve, you re-hydrate it. It most closely resembles ground meat, so it’s a good choice for vegan burgers and sausages. 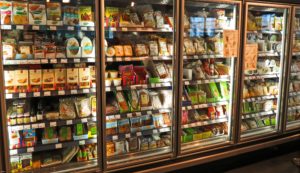 For ready-made vegan meats, there are lots of brands to choose from. They vary in terms of how artificial they are, so it’s a good idea to read labels.

Tofurkey – This is the first major meatless meat brand. They make just about everything from their famous vegan turkeys to sausages and deli meats.

Field Roast – These holiday-favorite products are made from quality ingredients like vital wheat gluten, vegetables, and lots of spices. They’re on the less-processed side of vegan meats, which makes them popular.

A vegan burger that bleeds?

Launched in 2012, Impossible Foods has been crafting a meatless burger that is indistinguishable from the real deal. Backed by Bill Gates and armed with over $180 million, the company studied what made animal products tick. They then found plant equivalents, most notably “heme.” This is found in plants and meat and is what gives meat its amazing cooking smell. The Impossible Burger is currently partnering with restaurants around the country to serve up their vegan burger.

Other issues with vegan meats as a whole include the high amount of sodium for flavor and preservation, and MSG, which is also used for flavor.  Hexane is another ingredient to be on the lookout for, though it’s actually used to extract oils from soy, and it’s unclear how much is leftover in the finished vegan meat. To avoid it, only buy 100% organic products, which ban hexane.

When in doubt, make your own

What these concerns surrounding vegan meat tell us is that when in doubt, it’s always best to make your own food. Then you have control over what goes into what. There are even more meat substitutes than the four listed, and include vegetables like mushrooms and eggplant, and even jackfruit, which has become increasingly popular as a substitute for BBQ pulled pork. Click here for recipes based on the specific type of meat you’re missing.

Hesitant to give up ice cream? Read about the rise of vegan ice cream!

Cruise Vacation Mistakes You Can Avoid

Best Hotel in Every Region of the United States