The end of the regular season in the National Football League came to a garrison finish this last weekend. Some teams’ hopes and dreams came true against long odds. Looking at you through the snow, Buffalo. Some teams’ hopes and dreams were dashed, though they faced shorter than daunting odds. Looking at you through the mist, Seattle. This weekend begins the three-week process that will result in two Super Bowl LII combatants meeting in Minneapolis, Feb. 4, 2018. They call it “Wild Card Weekend,” and it can indeed get wild. So, we offer today Gildshire’s guide to Wild Card weekend. What are the key storylines? Are there any upsets on the horizon? What side should you take, if you like to make a friendly wager with your neighbor? All here right now, in Gildshire’s Guide. 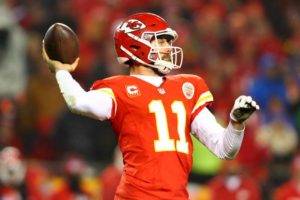 Gildshire’s guide respects the heck out of veteran quarterbacks, such as Alex Smith.

Tennessee Titans @ Kansas City Chiefs:  Fable and lore from time immemorial tell tales of the Young Turk versus the Aging Warrior. That’s the kind of backdrop the Chiefs and Titans compete before in the Wild Card opener. The aging warrior is Kansas City Chief’s quarterback Alex Smith. A former Number One draft pick out of Utah, Smith hasn’t ever reached a Super Bowl. He has a Young Turk on his own sideline in Patrick Mahomes. However, the Young Turk in this gladiators’ tale is Tennessee’s Marcus Mariota. The former second-pick overall out of Oregon looks to take Smith down and make his own way to the Super Bowl.

Unfortunately for Mariota, the teams are moving in opposite directions. The Chiefs have won four straight games after a 1-6 stretch at midseason, while the Titans lost three out of four to end the season. The betting line reflects that fact, as well as how first-time starters have failed to produce in their first time to the postseason. The Chiefs are a nine-point favorite. That’s a big number, but in the postseason those kinds of spreads are covered more than they aren’t. Gun to head we would take the Titans, but we’re going to lay out of this one. Saturday, Jan. 6, 4:30 p.m. Eastern/1:30 p.m. Pacific, ABC-TV. 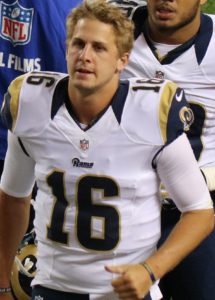 Atlanta Falcons @ Los Angeles Rams: Less than a year ago, the Falcons were poised to win their first Super Bowl. Owners of a 28-3 lead against the New England Patriots, the Falcons merely needed to get a couple of first downs and run out the clock. Alas, the wheels came completely off and Atlanta will be forever remembered for blowing a 25-point lead in the biggest sporting event in the world. That they are even back in the playoffs is a testament to their personal strength and team resolve. The cast is largely the same as last year’s cast. Will the end of the movie play out any differently?

Just two years removed from toiling in anonymity in St. Louis, the L.A. Rams are, suddenly, one of the hottest stories in the NFL. In one of football’s most-complete turnarounds, the Rams’ offense went from moribund in 2016 to on-fire in 2017. Credit second-year pro Jared Goff and MVP candidate running back Todd Gurley for some of that. Credit new Head Coach Sean McVay for the rest of it. The youngest Head Coach in the league, nevertheless McVay brings skill and enthusiasm to the Rams. The Rams are a seven-point favorite. We’ve been talking (and will continue to talk) about quarterbacks in the postseason for the first time. Goff is a newbie, while Falcons’ QB Matt Ryan is an established vet. We’re taking the points. Saturday, Jan. 7, 8:15 p.m. Eastern/ 5:15 p.m. Pacific.

Buffalo Bill @ Jacksonville Jaguars: Have you heard the old joke, ‘At my age, I’m happy to be anywhere?” The Buffalo Bills are young and in the prime of life, but they may be happy to be anywhere but Buffalo this week. With the booming storm attacking the northeast, a trip to Jacksonville may be just what the doctor ordered. Will it turn out as the Bills’ fans order, though? The Jaguars’ status as the Number Three seed in the AFC surprised almost every NFL observer out there, Gildshire included. They did it with a strong defense and an offense allergic to mistakes. Super Bowl champions have been built on just such a foundation. Jacksonville quarterback Blake Bortles has never faced the hot breath of the playoffs. Will that inexperience be his undoing?

Buffalo made it into the post-season tournament on fumes, needing help to get to the finish line. The quarterback situation in Buffalo has been in flux all season, as Head Coach Sean McDermott flirted with one QB after another before settling on Tyrod Taylor. Football fans know one thing if they know anything at all. A quarterback must feel the confidence of his coach. Does Taylor feel he has McDermott’s confidence? One wonders how he could, but the Jaguars are favored by nine points. We think they will win the game, but nine is a lot of points to give with a quarterback in his first ever playoff game. Take the Bills and the points, but expect the Jags to win the game. Sunday, Jan. 7, 1 p.m. Eastern/ 10 a.m Pacific, CBS-TV.

Carolina Panthers @ New Orleans Saints: Boy, aren’t there a lot of Young versus Old in the postseason quarterback story? Here’s yet another, as Cam Newton brings his Carolina Panthers into the Big Easy to face Drew Brees and the Saints. Of course, Newton established an on-field pedigree when he took the Panthers to Super Bowl 50 against Denver. Unfortunately, he established an off-field pedigree at the same time, when his petulant behavior in post-game interviews became news. The ultra-gifted Newton is two years older and, one would hope, wiser.

On the way to protecting the 40-year old Brees, Saints’ Head Coach Sean Payton discovered running the football and playing defense. Imagine that. The Saints’ running game may be the story of the postseason, leading the Saints to the Promised Land. Or, perhaps Brees will take back the reins and throw for 400 yards a game. The Saints are listed as seven-point favorites. We think that sounds about right, however, if we had to wager it would be on New Orleans.

So, will this weekend be a coming-out party for young and precocious quarterbacks? Or, will beards with touches of gray prevail? Will home teams defend their turf, or, will Road Warriors fly into town and fly back out with the boodle in hand? Will the betting chalk be the winning side, or will underdogs throw a wrench into the mix? However it turns out, know that Gildshire’s guide will be watching the action right along beside you.

I hope your team wins*

*My wish for your team to win is null and void if it conflicts with my team or the team on which I wager. Copyright 2018, all rights reserved by Gildshire’s Guide to Wild Card weekend.

Destination Hotels in the Mideastern Region of the U.S.