Hello again, everyone, this is your movie concierge for this evening. Would you like some zombies with comedy overtones? Would you prefer a live-action take on a fairy tale classic? Or, would you like to take a flyer on an art-house film that your neighbors will never go see because they only see blockbusters? Any of the above are available from my hand of service to you. Oh, previews of coming attractions, you say? Well, read on, friend, and discover the wonders of Gildshire’s movie night out. It should be a great movie weekend, but you should allow us to get your tickets soon.

This sequel to the 2014 smash hit finds Mallie (that’s what her friends call her, or so I’m told.) about to celebrate her daughter’s wedding. But, an unexpected guest strains familial bonds. There is a lot to like here, but also a lot of air. Starring Angelina Jolie as Maleficent, Elle Fanning as Aurora, Michelle Pfeiffer as Queen Ingrith, and Sam Riley as Diaval. Rotten Tomatoes 42, Gildshire 3.5.

Another sequel, but one that grows better with age. In this one, the family is back together, fighting the undead and riffing on each other. Gildshire likes movies where the actors appear to be having a great time, and this star-filled (Not quite All-Star, but close) film fills that bill. It stars Woody Harrelson as Tallahassee, Jesse Eisenberg as Columbus, Emma Stone as Wichita, and Abigail Breslin as Little Rock. Rotten Tomatoes 70, Gildshire 4.4.

You are familiar with the term “taut thriller?” Watch a minute or so of the trailer for this film, and you’ll know forever what that term means. This movie is about rage, jealousy, claustrophobia, and machismo portrayed by Robert Pattinson and Willem Defoe. Valeriia Karaman is in it too, but this is mano v. mano for the heavyweight title. Rotten Tomatoes 93, Gildshire 4.4. 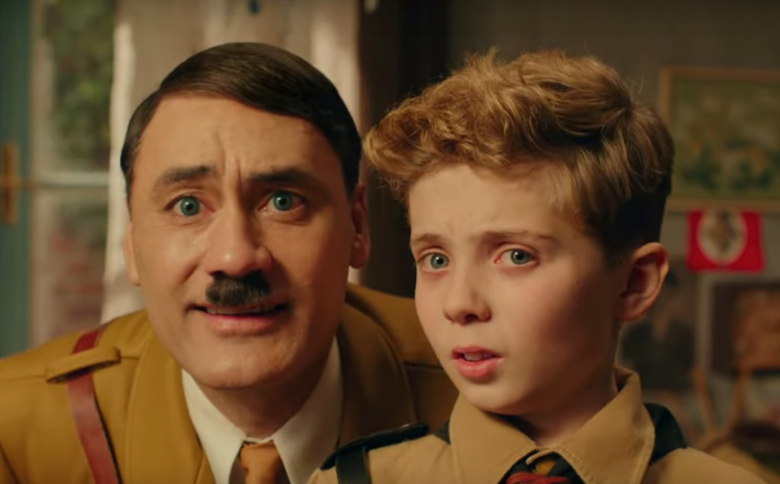 Anti-hate messages come clothed in many wardrobes. Sometimes, they are heartbreaking. Other times, rage-inducing. Jojo Rabbit is an anti-hate message clothed in childhood wonder and whimsy. There are Nazis and comedy in this film, and it will NOT be for everyone for that reason. But its endearing qualities won Gildshire over, and made it the Gildshire Movie of the Fortnight. It stars Roman Griffin Davis as JoJo, Thomasin McKenzie as Elsa, Taika Waititi as Adolf Hitler, and Rebel Wilson as Frau Rahm.

That’s what we have for Gildshire’s move night out this week. Now, can your concierge purchase show tickets for you and your lovely/handsome companion? Fortunately, all of these movies have redeeming qualities and reasons to see them. This is one week that you can’t go too wrong. What will it be, friend, because your every impulse is my life command.