The Greatest Road Trip Ever Taken continues today with our examination of Arkansas. Pronounced Ar-Kan-Saw if you are anywhere but Kansas (where they occasionally call it Ar-Kansas) it is the 29th largest state in land mass and the 32nd in population. That makes it a balanced urban/rural state.

Arkansas was admitted to the Union June 15, 1836. Arkansas withdrew from the United States during the Civil War and joined the Confederate States of America. The economy of Arkansas would suffer after the war ended, due to its history of reliance on slavery and plantations.

Arkansas differs from its Deep South brothers in several ways. It is the only state in the region not connected to the Gulf of Mexico. It’s also the only state on our tour so far to be bordered by six other states. Louisiana and Mississippi border Arkansas to the south and southeast respectively. Missouri mans Arkansas’ northern border. Tennessee is the extreme northeast border state to Arkansas. Oklahoma stands sentinel on the majority of Arkansas’ western door. Texas borders Arkansas in the extreme southwestern corner.

Little Rock is both the capital and Arkansas’ largest city. It is also the only city with a population greater than 100,000.

The highest point in Arkansas is atop 2,753 foot Mount Magazine, located in the west/central portion of the State. The lowest point is along the shores of the Ouachita River at the Louisiana border, 55 feet above sea level. The geographic center of Arkansas is found in Pulaski, 12 miles northwest of Little Rock.

Northwest Arkansas Regional in Highfill serves about a half million passengers a year. The most popular destination is Dallas.

Bill and Hillary Clinton National in Little Rock enplanes just over a million customers a year. Atlanta is the most common destination. 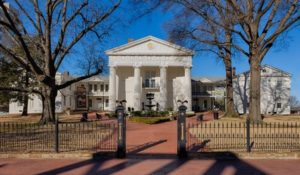 Weird and Wonderful Facts About Arkansas:

Though technically landlocked Arkansas contains over 600,000 acres of lakes and 9,700 miles of streams and rivers.

Alma claims the title of “Spinach Capital of the World.”

The fiddle is the official state instrument.

Let’s Take a Trip Through Arkansas:

Who doesn’t like a good cave? Arkansas is the first state so far with a significant cavern system. We start our Arkansas trip underground in the Ozark National Forest. Mystic Caverns connects with Crystal Dome to form an underground world of wonder. We will stay at the Hotel Seville in Harrison. Rates from $52/night.

Driving south for about 3.5 hours will find us in Hot Springs. The Visitor Center at Fordyce Bathhouse must be our first stop. We will see and hear what makes Hot Springs famous and enjoy a tour showing the history of the place. After that, let’s take a soak!  Choose one of the many springs scattered around town. It is hard to go wrong!

Later, relaxed and refreshed, we want to take on the challenging track at Pirate’s Cove Adventure Miniature Golf. Clean and well-maintained the course is a treat for all ages. 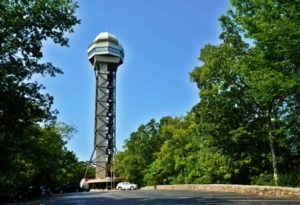 After dinner, we’re going to take a drive up to Hot Springs Mountain Tower. From there we will be able to see the bucolic Arkansas scenery for hundreds of miles. With the view still on our mind, we’ll stay the night at the Country Inn Lake Resort for $75 a night.

We will get up the next morning and head south to the town of El Dorado. A boom town during the oil rush period in the early 1900s, it still has much of the flair and flavor of the era. This is a vacation gem with an array of restaurants, shopping, and nightlife. We recommend trying it all, but we will close the trip through Arkansas with a peaceful walk. The South Arkansas Arboretum hosts picnics and weddings, but mostly it hosts folks looking for meaningful solitude in a quiet place.

It has been a wonderful, action packed trip. Now, we rest in the trees and listen to the songs of nature sing to us. Tonight we stay at Country Inn and Suites El Dorado. Rooms are from $99 a night.

The Greatest Road Trip bids the Deep South goodbye and thanks for the memories with this jaunt through Arkansas. It has been a pleasure sharing the antebellum architecture, and the magnolia trees.

We can’t leave this part of the world without a last mention of what we have seen and heard on our trip so far. The architecture and magnolia tree were great, but that isn’t the main memory we will carry forth.

Nowhere else in the country will we find a group of people with a greater pride in their region, or a greater willingness to talk about it. Southern folks feel a kinship with their land and their neighbor. Those are attitudes to which many states and regions give lip service. It is a very real thing down here.

Study Finds Being a Good Parent Could Destroy You