Aloha, everyone. The Greatest Road Trip Ever Taken tour of the United States counts 28 down and 25 to go. Washington D.C. isn’t a state, but it surely deserved a place at the table. We will split California into southern, central, and northern sections.

We just completed a chilly but gorgeous tour of New England. Now it’s time for some warm sun, sandy beaches, and fire breathing volcanoes. For a combination of the three, there is nowhere in the world like Hawaii!

Hawaii’s political history is an interesting story unto itself. Self-ruled for many years the islands underwent unrest as well as times of peace and prosperity under royal family governance. In March of 1959, President Eisenhower signed the Hawaii Admission Act, welcoming our 50th state.

Hawaii has more unique features than any of the other 49 states. It is separated into 132 islands (not just the five you know) and has more diverse activities than the seventh smallest state with the tenth smallest population should deserve. Yes, it is a balanced urban/rural state.

Honolulu is Hawaii’s capital and by far the state’s only city with 100,000+ residents. The lowest spot in Hawaii is the Pacific Ocean, found in many places. The highest point is massive Mauna Kea located on the Big Island of Hawaii. Mauna Kea is 13,803 feet high and taller than Everest if measured from its underwater base.

In some states, it is difficult to gauge a statewide “attitude.” Not so with Hawaii. The Polynesian culture, warm weather, and surroundings conducive to a tropical paradise beget a laid-back easygoing lifestyle. Understand though, the native Hawaiians are fiercely proud of their ancestry and way of life. Visitors are welcomed with open arms, but guests who become transplants are “Haoles” who may find assimilation difficult. 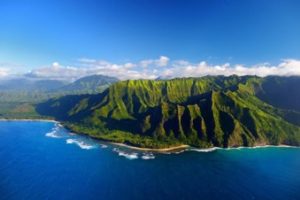 From the “you already knew this” file, Hawaii is surrounded in its entirety by the Pacific Ocean. You may not know that Hawaii has its own time zone and does not recognize Daylight Savings Time.

Hilo International serves resident and visitors to The Big Island, enplaning over 600,000 flyers a year. The most common destination is Honolulu.

Lihue Airport greets over a million passengers annually. More than half are flying to and from Honolulu.

Kona International is The Big Island’s larger airport, serving almost 1.5 million travelers every year. Almost half are going to Honolulu.

Kahului Airport serves the three million flyers in and out of Maui. Honolulu is the favorite destination. 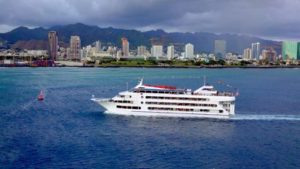 Weird and Wonderful Facts about Hawaii:

Hawaii is the only state in the Union that grows coffee.

More than one-third of the world’s commercial supply of pineapples comes from Hawaii.

The Big Island is the worldwide leader in the production of macadamia nuts and orchids. 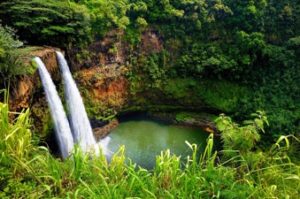 Let’s take a Trip Through Hawaii:

Not since we visited Alaska has our trip through a state been so unique. We will rent a car for trips around some of the islands, but we will hop from island to island by air.

Traveling southeast to northwest this time we start on The Big Island. Massive and grand Mauna Kea towers over the landscape, master of all he sees. We will visit the Mauna Kea Visitor Information Station and take a trip up the mountainside.

There will be some hiking involved (nothing to tax any but the youngest children) before the payoff on top of the world. We will stay until just after the green flash in the ocean denoted sunset. Then prepare to sit back and be amazed. We will see some stars in Southern California, but nothing like these stars! Not even close! It feels as though we could reach out and touch them. We have done some cool things on this trip, but none were more awe-inspiring than this.

Overnight at Arnott’s Lodge back in Hilo. Rooms for $99 a night. This is a bargain price, please trust us on that.

The next morning we are on a plane for the brief flight to Maui. Once there we will visit Ka’anapali Beach, just minutes from the international airport. The nicest beach on the island, Ka’anapali is beautiful white sand stretching for miles, no matter which way you look. Our winter (if 80 degrees can be considered winter) trip gives us the chance to see whales and spinner dolphins offshore.

Next, we will rent a car for the cross-island trip to Hana. There are glitzier things to do on Maui than the drive to Hana, but nowhere will you experience a more uniquely Hawaiian experience. The drive, over narrow jungle roads, passes through some of the richest and most colorful flora under creation.

We packed a picnic lunch and made a half day of it. Waterfalls (Have I mentioned The Greatest Road Trip’s love of a good waterfall?) are abundant. They vary greatly in both height and water volume.

This is the Hawaii of James Michener. Resorts and Waikiki are fun and exciting, but a Hawaiian vacation simply must include the road to Hana. When we get back, we will spend the night at the Maui Seaside Hotel for $159 a night.

We warned you. Lodging in this state is among the most expensive we will experience on this or any trip. 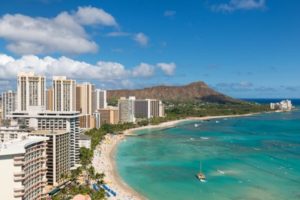 The next morning we are back in the air, this time to Honolulu. Waikiki Beach is our first stop. This iconic stretch of land and sand is home to some of the world’s most luxurious hotels. We find the beach itself to be narrower than expected, but the views, on and off the beach, are stunning. The sand is soft and the water very clear.  Squint just a little and imagine Elvis walking up the beach strumming his guitar.

We walk a block or so into town and find a patio bar selling pina colada with ice cream in it. One of these tasty delights and we may be back every day. We will be staying three nights at the White Sands Hotel for $129 a night.

The next day we are off to the Polynesian Cultural Center to gain some knowledge and eat some great GREAT food. The grounds are gorgeous, and the chance to learn about seven different Polynesian cultures is unmatched. At the end of the day, we will luau and learn to hula…with or without fire on our skirts.

The next day we’re going to visit Pearl Harbor. Our guided tour will leave from Honolulu and last all day. We will visit and pay our respects to the USS Arizona. A brief video will teach those who don’t already know about it the story of Dec. 7, 1941. A day that will live in infamy.

It is said that Hawaii isn’t for everyone. We say it is for everyone, at least once, and are honored to have led this too-brief tour.