Welcome to the Bluegrass State. Today, The Greatest Road Trip Ever Taken turns its attention to this lovely part of our country.

“The sun shines bright in the old Kentucky home ‘Tis summer, the people are gay,” Or words to that effect. “My Old Kentucky Home” is the song that opens the world’s most prestigious horse race. The changes in the words to that song over time have mirrored the changes in society. What was once acceptable in speech or song lyric is no longer acceptable.

Originally a part of Virginia, in 1792 Kentucky became the 15th state to join the Union. Kentucky is the 13th smallest state in the Union and ranks 26th in population, making it another urban State.

Kentucky borders seven states. West Virginia lies to the east, Virginia to the southeast, Tennessee to the south, Missouri to the west, Illinois and Indiana to the northwest. Ohio to the north and northeast. 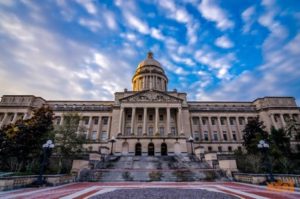 The capital of Kentucky is Frankfort. With only 25,527 residents Frankfort is one of t smallest state capitals in the country. The largest city in the state is Louisville. Besides Louisville (pronounced Lou-uh-vull by the natives) the only other city in Kentucky to boast more than 100,000 residents is Lexington. The geographic center of Tennessee is three miles NNW of Lebanon.

The weather is changing as we move north. Kentucky is the first state on our tour down south that experiences more than a few days a year with sub-freezing temperatures. The state is still considered humid subtropical and has hot summers, but the needle is moving down. 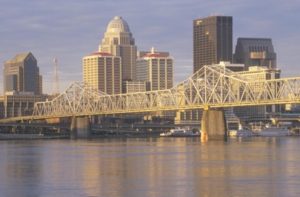 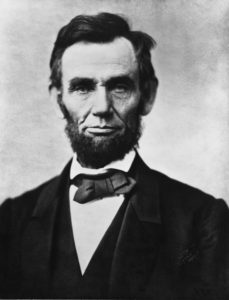 Weird and Wonderful Facts About Kentucky:

The Kentucky Derby is the oldest continuously held horse race in the country. It is held the first Saturday in May, at Churchill Downs in Louisville.

An estimated crowd of 105,000 annually attend the Derby. They consume almost a quarter million mint juleps.

Kaolin’s Restaurant in Louisville served the first cheeseburger in 1934, almost 40 years after the hamburger sandwich came to popularity in California.

A county in which alcohol is served is called, “wet.” Christian County in Kentucky is wet. Bourbon County is dry.

“Happy Birthday to You” was written in Kentucky.

Pikeville annually leads the nation in per capita consumption of Pepsi-Cola.

Pike County is famous for the Hatfield-McCoy feud, a vendetta that lasted from the Civil War to the 1890s. The feud came to an end when William Anderson Hatfield, nicknamed Devil Anse, was baptized into Christianity. 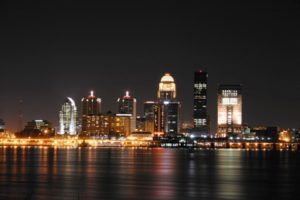 Let’s Take a Trip Through Kentucky:

We’re going to start our trip in the lovely city of Louisville. Unquestionably, the best time to come to Louisville is during Derby Week. Unless we are fortunate enough to be road tripping the first weekend in May the Kentucky Derby Museum is the best place to visit. It sits on the front steps of historic Churchill Downs and teaches almost a quarter million guests a year about the ins and outs of the Kentucky Derby. It’s a great time but, faster than we can say “Citation” the tour is complete.  We will stay the night at Microtel Inn & Suites by Wyndham Louisville East for an excellent $57. Get a good night’s sleep, for tomorrow is all about bourbon!

Just a half hour down I-65 from Louisville arrive at Shepherdsville. It is the home to the Jim Beam Distillery. They welcome visitors all year, and declare you won’t leave until you are family. We start our visit with a guided tour of the historic T. Jeremiah Beam home. Three generations of Beam distillers lived here, overlooking the scenic landscape and towering rack houses. Next, comes the stillhouse exhibit area where we will learn more than we thought possible about the making of American Scotch Whiskey. Finally, our tour card allows two free drinks and now we know enough to choose wisely and well. Also available is the opportunity to bottle our own using the knowledge gained. It is a good and educational half day.

Now it is on to Bardstown for the rest of the day. My Old Kentucky Dinner Train travels a picturesque rail line, serves dinner and is host to a train robbery! We will stay at the General Nelson Inn. Rooms from $77. 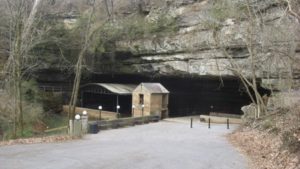 The Blue Grass Parkway and I-65 southwest to Lost River Cave are our journeys the next day. Lost River Cave is a unique feature of the area, accessible by boat. Tour guides tell the history of the place and show us some of the most interesting water we will ever see. We will stay the night at the Cardinal Motel. Rooms from $60. Get ready for some fast cars tomorrow!

The Corvette Museum will close our tour of the state. The history of the quintessential American sports car is traced from the earliest model to the current year.  The displays take us on side trips down the design and engineering lanes. Anyone who loves cars (even Mustang drivers) will appreciate the craftsmanship that goes into building a Corvette.

It is time to say goodbye to Kentucky. Let’s do it with the end of the song with which we began.

“A few more days for to tote the weary load,

No matter, ’twill never be light

A few more days till we totter on the road,