Welcome to the Great White North, as Minnesota is our next destination. It was a hardy group of people who came to this part of the world. They were Northern Europeans, for the most part. The Greatest Road Trip Ever Taken isn’t surprised. A state in which the most popular sports team is called the Vikings will have some ties to that part of the world. 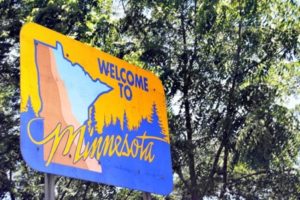 Minnesota was granted Statehood in 1858, largely by acclamation due to a population explosion. So many people had come to build farms and cut timber that Minnesota became the 32nd member of the United States on May 11, 1858.

Minnesota is bordered on the northwest by Canada’s Manitoba Province, and on the northeast by Ontario and Lake Superior. Wisconsin serves as wingman to the east. Iowa is to the south. The two Dakotas share the western border.

The geography and topography of Minnesota are among the most interesting in all the world. They call it the Land of Ten Thousand Lakes on their license plates. “Hyperbole!” you scoff. Actually, it isn’t. The water table is so close to the surface here that a lake is formed in every indentation in the ground. So how many lakes are there in this winter wonderland?  The Minnesota Department of Natural Resources says the state has 11,842 lakes ten acres or larger, and thousands more that are less than ten acres.

Minnesota. The only state in the Union with a humble license plate motto.

Minnesota is the 12th largest state. It ranks 21st in population, putting it on the rural side of the urban/rural equation. The capital is St. Paul, and the largest city is Minneapolis. Together they form the Twin Cities. Those two, along with Rochester (home of the famed Mayo Clinic), are the only cities in Minnesota with populations exceeding 100K.

It is a state of rolling hills, but real mountains aren’t a part of Minnesota. The high point is just 2,301 feet above sea level. That would be found on the top of Eagle Mountain (Okay, we’ll let that one go.) in the northeast part of Minnesota. The low point is along the banks of Lake Superior, 602 feet above sea level. The geographic center of the state is ten miles southwest of Brainerd, in Crow Wing County.

After a string of dual time zone states it is nice that all of Minnesota agrees on Central Time.

The Tax Foundation says Minnesotans get pretty close to par value for their dollar. Their dollar bill is worth $1.04 when compared to the nation as a whole.

Bemidji Regional enplanes about 22,000 folks each year. They are almost all going to Minneapolis-St. Paul.

Rochester International greets a little over 110,000 passengers annually. Chicago is the favorite destination.

Duluth International serves about 155,000 flyers a year. Many of them are bound for Minneapolis-St. Paul.

Weird and Wonderful Facts About Minnesota:

The Mall of America in Bloomington is the size of 78 football fields, totaling 9.5 million square feet.

Minneapolis is home to the Old Log Theater. It is the oldest continuously running theater in the world. 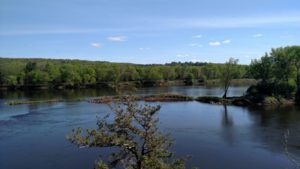 Pelican River is home to the world’s largest concrete pelican. It stands over 15 feet tall on the shores of the river that gives the town its name.

Minneapolis’ famed skyway system connects 52 blocks (nearly five miles) of downtown, making it possible to live, eat, work and shop without going outside in the winter.

Madison is the “Lutefisk Capital of the United States”.

Let’s Take a Trip Through Minnesota:

Ha, you had best get all of the warmth you can out of those blankets. Actually, you might want to bring them along. We’re going to Minnesota on a trip lasting 437 miles. We’ll see nature, weirdness, and one of those malls I usually skip. Let’s go!

International Falls is known, (affectionately?) as America’s Deep Freeze. Some of the lowest temperatures ever recorded in North America have been recorded here. How cold does it get? I would tell you, but my words would freeze halfway there.

Near International Falls, in the town of Ely, we’re going to have an experience unlike any other.

Yes, we’re going dog-sledding! Chilly Dogs is providing us with an adventure behind pups.

Chilly Dogs isn’t cheap, but the price tag (about $100 apiece, depending on the length of the trip) will be as worth it as anything we’ve done thus far. The whole experience will be about 2.5 hours. We will be on the trail for an hour. Part of the time we’ll be in the padded, covered enclosure, but that isn’t the best part. The highlight is when we are on the runners, guiding the dogs! All in all, a magnificent day in the north country, taking in the scenery and the experience. 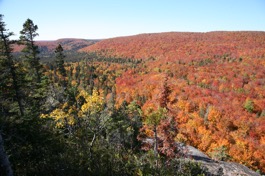 Back in the car for the 89-mile trip to Lutsen Mountain. On Minnesota’s eastern edge, we find the Lutsen Mountain Tram. This comfortable trip up the mountain includes breathtaking vistas of the hill below. Autumn is a wonderful time to take this journey, but year-round the views are spectacular. We will take the tram to the top, hike a few of the trails, and enjoy the excellent view of Lake Superior while having a bite to eat.

It has been a wonderful, albeit tiring day. You didn’t think I saw you snoozing in the car. We will spend the night at Lutsen Resort on Lake Superior for $81.

It’s only 14 miles to Temperance River State Park. The park got its name because of the speed of the water flow. The water travels so quickly a river bar can’t be formed. What do you call a place without a bar? Temperance, of course. Minnesotans have a quirky sense of humor.

We’re going to take the trail that winds along the edge of the Temperance River Gorge. I can’t wait to show you the rushing waterfalls. They are surrounded by pine, spruce, cedar and birch forests. The rapidly flowing river has cut deep potholes in and along the riverbed. Let’s hike the trail to Hidden Falls, before going on.

Wow, there is something about the bracing Minnesota air! I have tons of energy, and your cheeks have never looked so pink. Frostbite? Nah, you’re fine.

We will get some rest before our next stop. It’s almost 4.5 hours away. We’re going to Darwin. You wonder why we’re going to learn about evolution on our trip? No, different Darwin. Wait until we get there.

There it is. The World’s Largest Ball of Twine!

Disclaimer: There is some conflict between Darwin and a certain similar ball in Kansas. Minnesota got here first.

Made famous in a song by Weird Al Yankovic, the ball of twine is protected by its very own pagoda. You can see it there in all its glory. There’s a museum/gift shop (natch) where we learn about the ball and see pictures of Yankovic’s stop here.

Isn’t this spectacular? This is the kind of thing I promised when we started all those months ago. If fight promoter Don King was here he would say what’s on my mind. Only in America!

Back in the car for the final significant leg of the trip. We will spend a couple of nights at the Hampton Inn & Suites Minneapolis/Downtown for $93 a nigh. 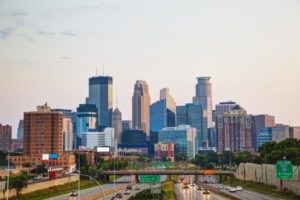 Our first full day in Minneapolis/St. Paul will involve shopping ’til we drop. Just outside Minneapolis, in the city of Bloomington, we find the Mall of America.

This place is off the chain! First, there’s an amusement park inside called Nickelodeon Universe. It is sort of a mini Six Flags. It has four roller coasters and a log flume ride…in a shopping mall.

For lunch, we have a choice of, well, pretty much anything. Places that are endemic to a mall setting include Hard Rock Café, Bubba Gump Shrimp Co., Hooters, and Rainforest Cafe’. How about Hooters?

After lunch at the Rainforest Cafe’ we will go into some of the stores we wanted to hit and window shop at others. There is a Mall of America phone app that we downloaded in advance. It provided us with some directional guidance, because you could, seriously, get lost for a week.

For our last stop in the Mall of America, we went to the in-mall comedy club. Because we could.

I’m beat. We have one more thing to enjoy in the area. We will enjoy it tomorrow.

The Greatest Road Trip Ever Taken loves community theater. The Minneapolis area has one of the best and most unique theaters in the country.

The Guthrie Theater is this area’s Tony-Award winning center for theater performance, production, education, and professional training. It was the brainchild of Sir Tyrone Guthrie, Oliver Rea, and Peter Zeisler. They wanted to create a company that performs the classics in an atmosphere removed from the commercialization of Broadway.

We get tickets to a show and step outside during intermission to see a spectacular view from the overlook. We can see the Old Stone Bridge across the Mississippi and the rest of Minneapolis/St. Paul.

It was a great finish to a great trip through the state. We hope you enjoyed sojourning through Minnesota.